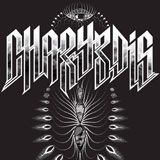 Some musicians are content to play out their entire careers with one band, or even just as a solo project. Others of course are greedy band hoarders – playing in four at a time, practising eighteen times a week and eventually metamorphosing each into an incestuous razzmatazz of all the others. When it comes to Brighton-based drummer Ant Cole however, you simply get the sense that the formidably talented percussionist is simply musically restless, happy to let his expended ideas pass to make way for new fresher ideas. The former-Dopefight and War Wolf and current TEEF sticksmith is also the head-honcho at the helm of Headless Guru Records – the DIY label that’s brought us numerous superb outings from largely Brighton-based acts including Sea Bastard, Wizard Fight and Torpor, alongside TEEF and War Wolf themselves and a buttload of filthy hardcore to boot.

With his latest experiment, a power-sludge duo by the monstrous, oceanic name of Charybdis (pronounced KAR-RIB-DIS), you again could highlight the freshness in approach versus Cole’s previous acts, whilst simultaneously linking the typically sheer velocity with the likes of TEEF and War Wolf and the more calculated, smouldering nooses to Dopefight and Sea Bastard. Teaming up with Neil Kingsbury (ex-Fall Of Effrafa/Blackstorm), who mans the guitar and microphone, there’s a sure-fire move here towards the more stoner-metal end of the spectrum for Cole’s usually ferocious brand of ass-kicking sludgecraft. A basic two-track demo outing is all we have access to so far, but there’s enough variety and bitchin’ riffin’ chucked in to moisten our fangs for further outings to come.

Track one, Into the Light could be lazily categorised as “sounds like High On Fire”, but actually rocks a more volatile, vulnerable spirit, particularly in the vocals, whilst Kingsbury’s persistently chugging riffage reminds me more closely of Black Tusk or Saviours at their most bloodthirsty. Cole’s tub-thumping remains his signature pummel in style, but there’s a patience to his execution that leaves you hanging on the edge of each riff cycle eager to hear where the progression will extend to next, a key trait which once made Dopefight such devastatingly unhinged sludge grafters back in the early part of this decade. Topped off with Kingsbury’s gruff, yet half-distant bark, it’s a tasty little starter for ten.

Moving Into The Deep and the same initially plodding, chunky riffage greets the ear. But Kingsbury this time shifts his vocal approach into a closely Wino-centric territory, leaving comparisons to The Hidden hand, The Obsessed and the grisliest of Saint Vitus songs well within reach. The rough-around-the-edges production and fuzzy feedback also fits the Maryland template well – this is a DIY band with zero fucks given for polished radio studio rock n’ roll, make no mistake. Perhaps a little more of a straight-up banger, without the neat, yet squealing solo of its partner track, Into The Deep certainly carries the crunch and the swagger to set heads to nod-mode in pubs across the South Coast and beyond.

It’s early days for Charybdis, but if you’re roaming around on the cliffs upon a foggy eve hungry for riffs to guzzle up, then do consider this demo as a rather meaty slice of a hopefully far larger pie. The Headless Guru himself may like a new band or several, but who’s to argue when they sink your battleship as hard as Charybdis.