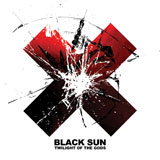 Black Sun. The name has an apocalyptic edge to it, don’tcha think? An end of the world vibe. Makes me think of entropy, heat-death, the fimbulvetr, black holes and gotterdammerung. Kinda ironic, really, seeing as how ‘gotterdammerung’ translates as ‘twilight of the gods’, which is the title of this very recording.

See what happened there? The whole thing looped back on itself, like Jörmungandr, the world serpent who encircles the world and swallows his own tail……and do you know what happens when he lets go of his own tail?

Black Sun are the heralds of the end of the world and ‘Twilight Of The Gods’ is the sound of the apocalypse, the great unveiling. Coal-black angels of extermination and the foot-soldiers of nihilism. Their world is a cold and unforgiving one, and they don’t flinch from showing it to you in all of its bleakness over the course of eleven transmissions from the end of all things.

‘Code Black’ is a bare-knuckled punch in the face. Low-slung riffage and tumbling notes assault the ears, vocalist/Drum Major Russell McEwan declaims and exhorts, whilst guitarist/vocalist Kevin Hare circles and shrieks like a predatory hyena.

‘Terminal Velocity’ is a discordant gospel, Hare’s scathing vocals and scourging guitar carrying the message to the listener’s ears. A drivingly motorik beat anchors the whole until cataclysm erupts halfway in and all hell breaks loose. McEwan’s vocals alternately command and float ethereally atop the subsonic pummel of Graeme Leggate’s bass, voice raised on high.

‘Crawling Saviour’ has all of the minimalistic dragging sloth of prime Swans, with the added bite of Hare’s slow-motion Slayer-esque guitar lines and some truly animalistic vocals. An unexpected clean guitar drop-out wrong foots the listener, leaving them reeling on the edge of the tar pit, before being sucked back in again by the hypnotic dirge that unfolds.

‘Gethsemane’ is intensely dramatic and dramatically intense. McEwan sounding for all the world like he is announcing the call to prayer, only to be answered by the snarling Hare and his rhythmically chugging guitar. The track builds itself into a driven fenzy, ending only for the call to prayer again.

‘Tabula Rasa’ lurches and slouches toward Bethlehem, rough beast indeed, propelled by McEwan’s minimalist drumming and some truly leaden bass. This is also the first appearance on ‘Twilight of The Gods’ by the inimitably twisted Eugene Robinson of Oxbow infamy. His hoarse whispering and shrieking lunacy drives McEwan to greater heights of passionate declamation as the music twists and judders around them. Hare joins in and the vocal triad becomes utterly sub-human, McEwan asserting over and over that he IS going to kill us. On balance, one would tend to believe it.

‘Transcending The Mire’ is the consummate psychedelic metal track. Flanged and phased guitars give way to serpentine lines that entwine around the pulsating undertow of bass, a black hole opens up within the track, drawing in all light, and all around the commanding voice of McEwan, thrown into relief by the snarls of Hare.

‘Black Angel’ is a propulsive lumbering lurch, dramatic vocals trading off against demonic howls, in an anti-glam rock stomp fuelled by noise-rock guitars. Black Sun as negative zone Glitter Band by way of Today Is The Day.

‘The Soldiers Prayer’ is stealth-swamp metal, riffs lower than a snakes belly and encrusted in filth. Post-punk informs this track, the Joy Division influence rearing its head at several points, but the guitars bite down HARD. McEwan recites his soldiers’ prayer over a military tattoo and a gang vocal roar like a man who has been there and back again.

‘Baby Don’t Cry’ is a harrowing lysergic nightmare. The entire band sounds as though they are being warped under high gravity, and all the while Eugene Robinson whispers, croons, shrieks and moans like a man whose inner demons have come home to roost. This is Doom Metal as played by NY Synth-punks Suicide. Hare’s guitars carve odd shapes out of the aether and Leggate’s bass plumbs the very depths. McEwan’s hard-hitting percussive shapes serve to nail the whole writhing track to earth, as Robinson’s vocals move further out into the realms of disassociated hysteria. The sound of the Swans ‘Cop’ hijacked by a maniac and driven over a cliff into nothingness.

‘Warhead’ is like a shot of ECT after the preceding madness. Bristling with aggression and testosterone, Black Sun rock the fuck out and cave skulls in. Counting down to blast-off, McEwan and Hare spit at each other and the listener, locking horns in a vulgar display of power.

‘Twilight Of The Gods’ is almost contemplative after the preceding lunacy. Tautly psychedelic guitars and restrained percussion lead into a staccato volley of stun-guitar sludge as McEwan rhapsodises and howls. Hare’s guitar evoking an anti-Zeppelin riff as both vocalists passionately cry out before the dead-stop of final silence.

There is ONLY Black Sun.