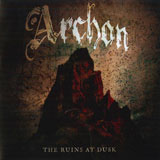 Hailing from Brooklyn NY, home of heavy brethren Batillus and the mighty Hull, Archon are an earth-moving beast of serious burden. Spawned from the mind of Andrew Jude, ex-of the criminally underappreciated Agnosis, Archon DEMAND attention.

Drums, bass, guitars and vocals are used as battering rams with which to assault the senses and crumble any defences that may lay between Archon and their ultimate goal – pulverising your puny human form into submission. Lumbering riffs, elephantine pounding, shredded throats – both male and female – and acidic wah-wah guitar lines are smashed together into a wrecking ball of sound that Archon use to enlighten the ignorant, and I can’t see them taking any prisoners.

‘Helena (Ruins At Dusk)’ leads the assault, materialising from a fog of chiming, tinkling cymbals and subdued feedback, quickly thickening into a psychedelic bulldozer of guitar grunt, spidery wah and battering percussion. Archon start as they mean to go on by smashing their massive riffs into your face again and again until you cave in and crumple under the onslaught…..and make no mistake, these riffs are GARGANTUAN.

Dropping down to subtly rumbling bass, understated clean guitar and those ever-present wah licks halfway through is a standard move, but one that serves only to highlight Archon’s bludgeoning power when playing full-tilt. The wah-wah action becomes more frenzied and entwined around itself as the track moves toward it’s inevitable end, with drums and subsonic bass too picking up pace in the final strait.

‘Nature Is Satan’s Church’ has a relentlessly rolling choppy central riff that powers through the body of the entire track and has more than a little of the outer-dark coldness of fellow New Yorkers Unearthly Trance in its DNA, but leavened with the psychedelic bluesy feel of the spiralling wah guitar and, almost subliminal at times, droning female vocals that drape themselves across the mid-section. Those visceral vocals and tumbling ‘mountain-falling-down’ drums are pure UT also, which is sure as hell no bad thing. NY legends Winter also rear their frost-encrusted heads when Archon switch down several gears to a truly glacial pace and completely doom out for the rest of the track, all crushing chords, skyward guitar fills and monolithic drummage. Some terrific vocal interplay between Chris Dialogue and Rachel Brown here too, her droning melodics over his harsh throat destruction devolving into both vocalists shrieking bile across each other atop the slowly churning morass below.

‘The Hymn Of Mendregard’ is, for me, the real standout of this record, which is really saying something – thickly humming sustained guitar lines laser across splashing cymbals and minimal snare work, chords droning into one another and subtly shifting into elegiac harmonised layers of sound, those bestial male/female vocals trading lines across the miles-deep harmonies and just this thick, thick wall of black sound stretching across as far as the ears can hear. I am an absolute sucker for harmonised guitars, and this track is dripping with them – not in a ‘Thin Lizzy’ way, but utilised in order to thicken the churning drone and add subtle tonal depths and nuances. Yeah, I’m smitten. Consider me smited.

‘The Fate Of Gods’ brings down the curtain on ‘The Ruins At Dusk’ with class, style and great-big fuck-off guitars. A slow churner that progresses over twenty plus minutes, layering wah-wah lines, violin-like feedback and sparse, distant, Black Metallic vocals into a mass of epic proportions. A truly hypnotic builder, made of interwoven filigrees of guitar that escalate and grow over the length of the track, ‘The Fate Of The Gods’ is a truly fitting end to a majestic and towering work of real modern Doom Metal.

In thrall to no-one, Archon have delivered a piece of work that stands firmly as a statement of intent and serves to more than whet the appetite for future endeavours from Mr Jude and his motley crew. Combining the earthy crushing power that we have come to expect from New York bands with the progressive touches of more traditional Doom Metal, Archon are most definitely one to watch for eagerly in times to come.

Epic in scope and crushing in execution, if you like it heavy, you’ll love Archon.