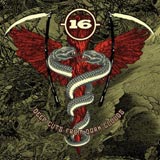 One for the moshers. A band with an undeniable pedigree, the time served Californian veterans 16 black vomit forth ten tense and troubled tracks of depressed agropunkmetal filth that instantly hits the pleasure centre. Good solid decent stuff here, although nothing outstanding – I mean this ain’t fucking ‘Damaged’ or ‘Rock For Light’ or ‘Reign In Blood’ or ‘Liar’ or ‘Confederacy of Ruined Lives’ – in short it’s no work of genius that’s going to change the way that you think about and listen to music, but…it’s certainly not average either. And by that I don’t mean that it’s hovering slightly above mediocre – it’s actually levitating around an electric wire that’s marked ‘GOOD’. (And now in my mind all albums suddenly occupy a position that is marked by floating above and below imaginary wires labelled according to quality. I see ‘Never Mind The Bollocks’ near the pinnacle, in a cloudy and lofty zone inhabited by only select discs, whilst the base of this immense wire structure is clustered by tens of thousands of poor to mediocre albums – sad things that cost pointless studio time – they will never leave a mark).

Right then, you clicked on to read about the music didn’t you? ‘Deep Cuts…’ opens with ‘Theme from ‘Pillpopper’’ – a nasty little shitty-ditty that rides along on corpulent, grinding bass and curving cemented grooves, topped by Cris Jerue’s filthy and tortuous vocals – and all drenched in a gutsy and scummy production job that perfectly fits such dark goblets of sonic phlegm. Indeed all the tracks follow this stoic jaw-punch of a format – a bad-tempered coiling mid-tempo punk-sludge blueprint that recalls household names (if you live in my house) like Buzzov*en, Eyehategod, Acid Bath, Crowbar and…16. Well this is entirely understandable: they (16) did form in the early ‘90s and have therefore helped to pioneer a big dirty sound that you are all familiar with. Metal meets hardcore meets blues meets noise meets ‘alt-rock’ (hate that term but there is something very ‘Lollapalooza’ and ‘Silence of the Lambs’ about 16). Numbers like ‘Parasite’, ‘The Sad Clown’ and ‘Opium Hook’ (in fact all of ‘em) groove on a huge pulsing grumblefuzzbass and drum-driven concrete base of bluesy squalor. What 16 do they do very well – they have mastered the misery-metal distilled from a fistful of stateside influences and they spit it out of their cracked-lipped gobs with perfectly hateful aplomb. ‘Beyond Fixable’ is for me the best track on the album – an almost commercial punk rock blast of scuzzed-up vitriol that wouldn’t be out of place on the playlist of any 1990s metal radio show.

And that is the charm of ‘Deep Cuts…’ – it has quite the deep shit-streak of pre-21st century punksludge nostalgia running through it (it would not be out of place in a sweatbox blackwashed rock-club twenty years ago). As it stands, ‘Deep Cuts…’ is a more memorable, tighter, better constructed and more muscular progression than their last disc, ‘Bridges to Burn’, and if you came to this album with no previous reference point to 16’s back catalogue then you would still be pleased indeed to hear such chunky testosterone blocks of buzzing and malignant rhythm glazed with the kind of nasty distorted vox that perfectly compliments nasty distorted electric guitars. This is a good album – nowt special but just ‘good’ in a very reliable way. Crank it up to 11 and play air bass in front of the window with just your underpants/knickers on; then have a fag in front of the mirror staring meaningfully into your own reflected eyes. It’s that kind of album. I cannot speak any fairer than that. 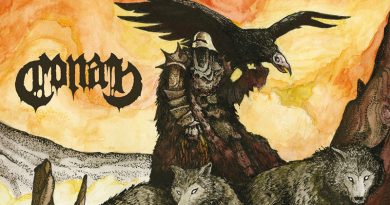