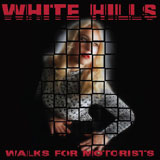 Let’s talk about love and let’s talk about music. I love White Hills because I suspect they love a lot of the classic music that I love too. I reckon they love Chrome and Kraftwerk and The Stooges and Hawkwind and Can and lots of other artistes I love too. I know they do because I can always hear those bands when I listen to them. Yet they still do things their own way (White Hills sound like White Hills) and I love that too. On this new collection (which was recorded in North Wales, which somehow feels very right), Dave W and Ego Sensation take their signature dope-head rock and subject it to a new economy of time and instrumentation – coming up with an eminently good album in the process.

The opening track (No Will – one of the album’s highlights) sets the pace and feel for the whole album – chunky bass-propelled mutant glam-disco garage punk. I could’ve added more there too. Sparse and efficient, Dave W’s voice intoning “waiting, I’m waiting, for a message” in a vaguely menacing fashion (but only vaguely mind – I wasn’t exactly shitting myself). The simple bass notes used here are lovely, all Motörhead and Hawkwind space-punk lovely. £Sd Or Usb continues the clean bass-driven attack overlaid with sparse electronic whooshing noises like you used to get on SF films in the eighties, when doors on space stations opened or someone in a silver suit fired a laser gun. This is a trippier track, achieving a more floaty feel than the punkish opener.

Wanderlust does the robot stomp with glee, with huge bass riffs from Miss Sensation, laying down a jerky rhythm that says androids will one day have sex and dance whilst humans live in cages underground. This is also the first track where we get some of Dave W’s masterful guitar pyrotechnics leaping out of the speakers. I like his use of restraint on this album, he could smother every track in wild guitar solos like he often does, but he chooses minimalism. The adage ‘less is more’ is most applicable here.

By the time Lead The Way cranks up I’m thinking that this is a brilliant White Hills album. They’ve managed to mix the raw Stooges power of 2013’s So You Are…So You’ll Be with a slightly new direction in terms of a more nuanced and stripped down future-rock that doesn’t quite need to hammer the often flamboyant (and sometimes overly sprawling) Hendrix-meets-Hawkwind template of yore. For me, this genre-melding works perfectly; I really like the shorter blasts of beefy punked-up space-rock that are put together here. Having said that, Lead The Way is a slow and hazy nine minute stonker, but it doesn’t feel mindlessly indulgent and meandering, there is a focus at work and it feels much shorter as a result. I’ve always liked White Hills’ feel for the dreamily erotic too – there is a kind of Moroder-period Donna Summer disco-sensuality to this track that brings me again to androids pleasuring each other in space, but this time with humans involved as sex-slaves.

I, Nomad (fine title) is a synth-based instrumental that throbs and bleeps like a synthetic silver crab scuttling over the surface of a far-off world. Possibly at risk of being a filler on a weaker LP, put in the context of this whole album I think it just about works as a mood-piece. Again, it doesn’t have the over-indulgence that White Hills have sometimes been guilty of with various past recordings. We Are What You Are is the obvious response to the peacefulness of the previous track – it’s a big strong glammed-up space chant with some ripping drum fills and some typically soaring guitar solos. In the past, this track would have screamed on into the ten-minute plus mark, yet here the decision to finish before four minutes have passed is an indicator of a band who no longer have to play up to the bloated psychedelic jam template in order to feel worthy of your attention.

Automated City pumps along to a relentless click track, strutting along in brisk fashion and again weighs in with economy of time and a sense of purpose. Life Is Upon You maybe highlights a slight weakness that has always been with White Hills, namely Dave W’s kind of non-singing Lou Reed-style vocals. I often wish he’d just belt the lyrics out in a more committed fashion and actually sing and scream, although I’m aware this could diminish the cold detached robot appeal of their psychoactive sound. Both the previous songs are, for me, possibly the weakest moments on the album, and I would have liked to have heard a leaner seven track collection.

The album closes with the very danceable instrumental Walks For Motorists, which is a superb slice of mechanical punk-funk, much in the same way as the opening track. The samples of a distant male voice here really invoke the sound and feel of Eno & Bryne’s classic My Life In The Bush Of Ghosts, again White Hills showing that they have fucking good taste when it comes to inspiration.

Another good piece of news here is that the recording is sharp, crisp and loud – most unlike the puzzlingly condensed and restrained production that marred their last studio outing. This album shows that a psychedelic band who are ten years into their life span (and with a very prolific output) can still write and record something that sounds energised and fresh and trippy, and above all, something that is simply enjoyable, something you want to pop in your CD tray or onto your turntable, and in this 21st century world of a billion albums by a billion bands, that is really saying something.