The first time I came across Italian psych acid folk, multi-instrumentalist Alessio Ferrari aka Upupa Rot, whose name shortly changed to Upupayāma when he realized that there was an Italian wine with the same name, it was during one of my daily browsing sessions on Bandcamp, looking for new and interesting bands with genres close to my tastes to play and expose during my weekly radio show, London Calling – Shades Of Rock.

It was the name and the album cover that first attracted me. Although a record cover sometimes misleads and doesn’t convey its inside story, this time it clearly expressed what the record was about. The music that made up the five tracks of his self-titled debut album blew my mind in seconds. It was nocturnal psych acid folk born during moments of relaxation after a day’s work.

Nestled in his family barn, up in the hills outside Parma, Alessio was able to translate bit by bit all his musical knowledge, transmit it through his instruments and release it with the celestial calm of a flowery Japanese garden. As far as influences are concerned, Alessio is a great admirer of the Japanese psych rock band Kikagaku Moyo who are the primary source of his musical influences, so much so that to give his first work the same acid sound as theirs, he sought, and with his big surprise, got the help of Yui Kimijima, a well-known Japanese experimental musician and sound engineer who has worked on almost all of Kikagaku Moyo’s works, to mix and master his album. His dream had come true.

An interview I carried out in 2020 with Upupayāma for the now defunct psych rock webzine Plenirockium (his first ever), brought to light a musician who composes music to convey all his emotions to his listeners using a variety of instruments, including sitar, alongside his warm, whispering voice to create dreamy landscapes of acid folk beauty.

After nearly two years of silence, which in the meantime saw the vinyl release of Upupayāma via Nashville’s notable Centripetal Force in conjunction with UK-based label Cardinal Fuzz, Alessio‘s musical inventiveness continues to grow. Holed up in his beloved barn, which seems to bring out his compositional creativity, he starts to lay down the foundations for his new album. Following the same approach as for his first work, Upupayāma surprises us on his second full-length album The Golden Pond, and it is once again the cover that acts as the preface to ten musical chapters, worked with style and musical wisdom by an artist whose music facets conceal a mystery that only he can unveil.

This time at the mixing desk he chose to work with Chris Smith, ‘The idea of entrusting Chris Smith with the mixing was mine’, Alessio tells me, ‘I already knew his work done with the Wax Machines (a psych acid folk collective from Brighton, UK) and Wax Machine’s new record Hermit’s Grove being great, I decided to work with him, and I was very happy. He’s really good. I will definitely work with Yui again, but I think it’s inspiring to change from time to time.’

To tell you the truth, it took quite a while for the record to grow on me. But it did, and in a very overwhelming and enthralling way. That made me realize where Alessio wants to take his new musical direction. The mixed acid folk and stoner sound on Cuckoos From The House Of Golden Tin really stunned me. But then I knew what he was bringing out musically was the kind of sound that he could play live with his new found backing band. Once again, he played all the instruments on his new album, except for the slow pace ‘cantilena’ of Come Here, Noriko, where the drums were remotely played by San Francisco band Dire Wolves’ drummer Sheila Bosco.

Alessio Ferrari has done it again. The Golden Pond lights up the cloudy skies and warms up your cold nights with musical splendour and magical atmospherics, taking you around his world and bringing you warm and wild images from his solitary wanderings around magical fields of musical inspirations. Prepare yourself to be ‘Spirited Away’ in the land of colourful scented exotic lotus. Love and Peace. 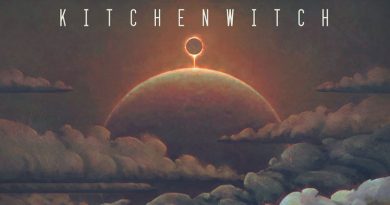