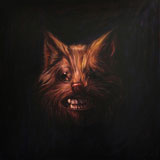 The return of Swans has to rank among the least cynical of comebacks/reunions/rebirths of any band in recent years – few bands command as much respect and fear (in fairly equal measure) as Michael Gira’s merry circus of outcasts and deviants, and The Seer is nothing if not a huge statement of intent. Only a handful of musicians retain the youthful fire of experimentalism in their bellies for so long, and for a man approaching sixty Gira has to be up there with Tom Waits and John Cale in terms of being a restless musical innovator, continuing to make interesting music while his contemporaries are getting ready to claim their pensions. The Seer is the culmination of thirty-years of ear-shattering, soul-crushing musical experience in an often overwhelming but awe-inspiring two-hour package.

Starting with something of a curve-ball, opening track ‘Lunacy’ is a lush orchestra of chiming guitars and Gira’s booming vocals, backed angelically by Low’s Alan Sparhawk and Mimi Parker. But it’s second song ‘Mother of the World’ that brings us into more familiar Swans territory – jarring rhythms? Check. Mind-melting repetition? Check. Slowly creeping sense of bewildering insanity as layers of ambient noise and freak-out vocals weave in and out of your speakers? Oh yes. The song’s overtly sexual lyrics (another Swans hallmark) are drilled into your brain with a repetition that mirrors the music: “In and out and in and out agai-ai-ai-ai-ain.”

The album’s centrepiece is the half-hour title-track which wastes no time in bringing the noise, a kind of drone palindrome, beginning with a racket that most drone bands would take half-an-hour to create before slowly clearing space for a clattering rhythm of twinkling piano, drums and frenetic cymbals, deep hypnotic bass notes and a queasy guitar slide. The song organically warps, twists and turns through prolonged crashes, drawn-out notes and even wailing harmonica before settling into final death-rattle groove, Gira purring “I love you too much” and various maniacally gibberish phrases. More than any other song on the album, the shapeshifting nature of the instrumentation demonstrates the immense skill of Swans in their current incarnation, a line-up that Gira has called the best ever. They cater to every musical whim so naturally – it’s really quite breathtaking.

The band further display their adaptability on ‘The Seer Returns’ which is a kind of blues shuffle, Gira delivering his lyrics like a whisky-voiced beat poet. In stark contrast ’93 Ave. B Blues’ is pure feral, nightmare noise – all swooning low-end, crashing cymbals and crying discordant strings. ‘A Piece of the Sky’ begins with nine minutes of drone before relaxing into a longing, melodic stomp and finishing with a Velvet Underground/Silver Jews-like twisted pop song. It’s one of the most lush moments on the album, an unexpectedly beautiful symphony of bells, pianos, mandolin, and a bouncing bassline with Gira crooning wonderfully. It turns out to be the final respite before album closer ‘The Apostate.’ It lulls you into a false sense of security with a relatively tense but chilled beginning but then six minutes in the band let rip. Screeching, headache-inducing guitars, crashes and a bizarre free jazz outro bring this dizzying, rollercoaster of an album to a close.

Swans are not a band known to make easy records and The Seer is no exception. For starters, it’s two hours long; some tracks contain sections of pure noise and feedback that are longer than some bands’ entire songs and the album includes songs that are longer than some bands’ entire albums. That being said, The Seer balances the classic abrasive Swans sound with moments of elegant beauty. The second disc opens with a straight-up country track, ‘Song for a Warrior’ which features Karen O on vocals, and is the prettiest track on the album, particularly when Gira joins in with backing vocals towards the end of the song. When Michael Gira said that he had utilised everything he had learnt in the last thirty years making this album you can hear that it’s true. Swans don’t need to make another Cop – they’ve made The Seer, a mature album from the mind of a man who refuses to grow old quietly.