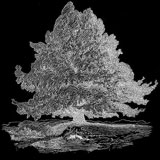 You can usually find some intentional humour on a band’s bandcamp page – Southern State, for instance, refer to their sound as ‘stoner’, ‘wizard’ and ‘sad bastard’. That’ll be something to do with their super-heavy metallic sound taking major cues from post-rock and shoegaze – two genres not well renowned for cultivating smiles or laughter.

Southern States’ three mysterious wizards conjure an unholy amount of noise – but with this, their new EP, they’re sure to be able to convince anybody with ears that their blend of rough, gruff metal and sweet, sparkling shoegaze is a potent one. This kind of music, whether it’s called ‘doomgaze’ or something else (I hate that fucking term), is currently gaining more traction in the relatively conserved indie crowd, and the massively-accepting metal community because the sounds WORK together. Sometimes, bands like Nothing and Alcest are bunched in with the general crowd of ‘doomgaze’, despite both coming at it from different angles and sounding nothing alike. I’m happy to say that Southern State’s particular sound is exciting because they’re playing as though nobody is listening: there isn’t an over-reliance on My Bloody Valentine (something the shoegazer scene is crippled by) nor is there any attempt to fool the listener into thinking they’re listening to ‘metal’.

The self-titled release kicks off with ‘Ascendant’, where between titanic grunge riffs, you’ll find sections of sparse, gleaming shoegaze – suggesting that somewhere down the line Southern State have either consciously channelled or indirectly hit the markers for some of the more intriguing 90’s sounds. Take for example the way the rhythm rolls like a truck – it’s as likely that they got there through one of Matt Pike’s heinous projects as they did through Swervedriver.

There’s an unbridled potency to this opening number, and boy have they mastered that long-forgotten concept – dynamics. The track actually feels like it’s in constant motion, the contrasting sections flow and ebb evenly, with some of the heavier moments being found in the sections between all the fuzz and bluster.

The second track ‘Old Gods’ falls between Neurosis-level battery and Sonic Youth-inspired dissonance. It’s a gigantic-sounding cut that straddles the divide between shimmering, barely-there guitar bliss-outs and grinding sludge. “Throw out the old gods/Bring in the new” is their call, set to a droning, crashing riff.

The penultimate number ‘Words And Phrases’ is a slow-burn epic, where the previously-heard melange of scalding drones and squalling guitar leads combine best. It’s loud-quiet-loud dynamic formula gives the track ‘room’, another thing missing from the Modern Shoegaze sound. There’s an appealing 90’s aesthetic at play here – the lyrics are Robert Smith-influenced and the downbeat vibe only adds to the emotional pull of the track.

If you’ve ever seen and enjoyed movies like The Crow, you’ll dig the connection between shoegaze and grunge – and the level-playing field they were once afforded under the umbrella of ‘Alternative Rock’. Amazing tracks by The Jesus & Mary Chain sit alongside monsters by Stone Temple Pilots that movies’ soundtrack, and neither feel out of place.

The record closes with the appropriately-titled ‘Burn Down’, which chars and soothes the listener in equal measure: As the track advances, the drums get more frantic, more urgent, before they suddenly drop back into a sedate, (almost) groovy sway. At times, the chiming swirl of clean guitar sounds and relentless yet understated drumming amounts to some of the sweetest sonic sugar around, before a blazing, purging guitar lead kicks in for mere seconds, white-hot and intense. Imagine Boris’ skewed take on shoegaze meeting head-on with their dreariest sludge and you get some idea of the power at play on this track.

This band is criminally under-supported – 94 likes on Facebook? Their sound could be as uniting as it could be divisive, but their complex arrangement of engaging textures and searing heaviness is well-crafted and impressive for a band of this stature. Basically, they’re making music far beyond their current strata in the community – this, if nothing else, should be applauded. We can only hope that the full-length capitalises on their incredible sound. If it doesn’t, it’ll be a crying shame. Support independent music! Support Southern State!