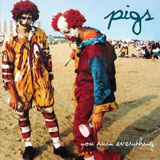 I feel compelled to start with a resounding ‘thank you’ here. This goes out to Dave Curran, Jim Paradise and Andrew Schneider for basically putting together the kind of album that reminded me of my halcyon days at university, before I could grow a proper joined-up beard. In between the almost tiresome daily routine of shagging and wanking and drinking and taking drugs I usually threw myself around the room to head-blistering albums like ‘Liar’ by Jesus Lizard, ‘Total Destruction’ by Unsane and ‘Betty’ by Helmet. This fine fine platter that I have the good fortune to review here captures the  essential energy and spirit of those past days of the finest noise rock that America had to offer, the kind of life-affirming post-grunge post-metal sonic spite that labels like Touch and Go, Amphetamine Reptile, Sub Pop and Matador coveted and catalogued so brilliantly.

With ‘You Ruin Everything’, New York City’s Pigs brandish a bellicose and brutish fistful of stylish sculptured noise that aims to please both the underground and a large and more mainstream ‘rock’ audience and hopefully succeeds. Big fucking tracks like ‘Give It’ are both out-there in their extreme power and hatefulness yet also capture a very accessible vibe that runs through the whole album. I confess that I made the initial mistake of thinking that the afore-mentioned opener was possibly a league or two ahead of most of the rest of the album (it certainly makes sense as the first track one hears) – I was wrong. On many repeated listens the whole album reveals itself as subtly latent super-quality and opens up into a downright exuberant casebook of song writing genius. Every track fits together as a fluent whole and lodges in the memory in the most lovely way that proper fucking albums do. Muchos praise too for Curran’s grande and embittered battle-roar vocals which well and truly manage to fire the excellent bass/guitar/drums interplay into the outside lane and beyond.

‘Whitewash’ chugs along on a sweet little hammer-on guitar phrase and then launches into the kind of driving and bruising charge that wholly characterises the addictive sound that stamps it’s boots all over these eleven tracks. ‘Massive Operator Error’ and ‘Drained’ are like a mutated Jesus Lizard tribute band that exists in a semi-parallel dimension and has been groomed for some kind of perverse pop stardom. ‘Contrition Dilemma’ is a blasting drum-fuelled head punch that wastes no time in making a point, loping along on big simple chord changes that are clever because they are so simple – after a few listens you are simulating the growl of the guitar in joyous recognition.

The rolling and mellow opening bars of ‘Small c Celebrity’ reminded me so much of something that took me quite a while to salvage from the old neuron vaults – Chicago’s Tortoise; whilst the breathless careering fury of ‘Mashantucket’ also recalls the brilliantly innovative power of early 1990s Chicago too, more in the form of Naked Raygun – albeit a messier and more fucked-up take. And what sweeter treat for a vintage Dr. Who nerd like my good self than to spot the rich tones of Tom Baker (and the crazed hysteria of Davros) on the last track – the malignant and crunching SF abstraction of ‘At Least It’s An Ethos Part 2’ (to further prove my nerd credentials I do believe the samples are from the sublime ‘Genesis Of The Daleks’).

When time-served members of other bands come together in a super-group the results can often be disappointing as so much expectation and clash of ego can dull and nullify the creative process. Not so here. With pasts and presents in outfits such as Unsane, Player’s Club and Slughog, these three mercenaries of noise weld together their skills in such a way as to fashion a distillation of all the best elements of prime American post-Nirvana ‘punk rock’. When the last track ends I press play again. And again. Everyday since I got this. Let me reiterate: what’s on offer with ‘You Ruin Everything’ is good and simple old-fashioned noise-rock that is so carefully constructed with such awesome quality, intelligence and heart that it almost becomes born again as something new and incredible. I’m signing off now readers – knocked out by a proper fucking album.