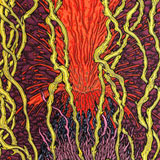 The latest side project from Cave In’s Caleb Scofield. Edging between sludge and an almost space rock feel, this debut album could not be more aptly titled. Distorted riffs being thrown to the background by Caleb’s singing, and then complimenting the grungy feedback layered bass and guitar with roaring screams. It’s hard to keep up with this band sometimes. The pace is nowhere near consistent most of the time, but strangely enough, it gives ‘Harmonic Tremors’ a unique charm to it.

Songs like ‘Silver Ghost’ that have a slow, drone-like feel to them with vocals to match… then moving into ‘Invisible Wolves’, which kicks off instantly with a barrage of throaty screaming and a unison of drums and guitars. It’s relentless in the fact that you don’t know what’s around the next corner. Upbeat singing, drum and bass-esque intros, walls of noise, and almost ethereal instrumental passages. It covers a wide spectrum of styles. Unfortunately, despite such willingness to experiment, this is where I feel it falls short in some areas. There’s a lack of involvement in the album, and despite the musicianship that’s gone into it, there’s not much that’ll stick in your head. They maybe should have concentrated their skills in certain areas than spreading themselves too thin, so to speak.

It’s a solid enough release, and it’s good to see a side project that has its own lease of life, and a potentially good recording career ahead of it. If you’re looking for something that’s on the lighter side of sludge metal, then this is perfect for you. The space rock/melodic sections with their psychedelic sampling, makes a nice balance for the heavier side of this band. I’m not sure how a hardcore doom metal fan would take to this, but it’s fun in its own little way, and Zozobra definitely has a sound of their own.