Motorpsycho are back with another addition to their bewildering catalogue of releases, and another example of the kind of fruitful artistic collaboration that has underpinned so much of their work. Ancient Astronauts (Stickman Records and Rune Grammofon, August 2022) springs from pieces written for a performance (Sacrificing) with Homan Sharifi and Impure Dance Company that links to some sort of film project that was conceived partly in response to the dissatisfaction with the lockdown livestream as a medium. As the press info tells us ‘This project is still underway, and the band will let us know if and when it is finished.’

I am far from a Motorpsycho expert and was initially pretty well frozen in approaching this album, feeling that I needed to do several months of research into their earlier material. So, I listened to Kingdom Of Oblivion a couple of times and then realised I’d need to just get stuck in. And in fact, this is not an obstructively inaccessible record for all that is strange about it.

At times barely there, Motorpsycho spend deceptively long periods in a drifting contemplative ambience or circling a simple pattern. These lulls may give room to patiently feel out a new progression or flare suddenly like flames from embers. Not much of your old fashioned song structures here, and plenty of reversals of expectation – for instance, the build central to Mona Lisa/Azrael reaches a furious pace before pulling away to nothing and returning as grandiose swaggering prog.

a truly skilled piece of music-making…

By contrast, there is a shimmering fragility to the sunrise opening of Chariot Of The Sun – To Phaeton On The Occasion Of Sunrise before the song finds its way into a confident forward movement, much closer to the ‘classic Motorpsycho’ tumble and vulnerable vocals that The Ladder drops into at the record’s outset. These two songs are distinctly different pieces however, while the opening track is very much a (very cleverly written) rock song, the closing twenty-two-minute epic sounds much more like accompanying music.

At times, almost akin to sketches working towards a piece of music, there is a sense that there is another component that we aren’t getting. Maybe this is one for the hypnogogic agent of your choice and some closed-eye exploration. Imperceptibly this ‘theme from an imagined movie’ pulls back and drifts away, Motorpsycho return us to the quiet from which the album springs.

This is perhaps not a record that will stand as central to Motorpsycho’s discography, and for someone coming to the band for the first time is probably not the most obvious place to start. It is nevertheless a truly skilled piece of music-making and receptive ears will find much pleasure in its openness, vision and vitality. 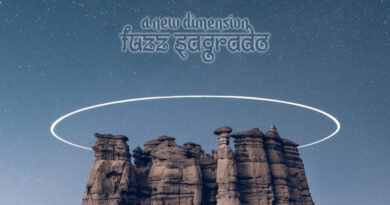