Emerging from the murky scene of Yorkshire in the UK in 2014, twisted five-piece Mastiff have been smashing grindcore and powerviolence into spiteful blackened sludge over the course of two albums and as many EP’s: not so quietly or subtly refining their craft like the mining of crude oil. Their third full length, Leave Me The Ashes Of The Earth, is a torturous affair that articulates pain, frustration and anguish expressed in the sound of a wrecking ball.

Taking their cues from British extreme metal stalwarts Napalm Death and adding flavours of American sludge and hardcore punk, this noisy, intense bludgeoning announces their arrival on eOne Heavy in a furious barrage of catharsis that looks to spread darkness to every soul and ear drum it can reach. Like many artists who found themselves stranded during 2020, the band have festered and raged without access to a studio and now spew their updated bile onto an unsuspecting public.

The ominous, slow rasping howls and doom drenched opening of The Hiss sets an atmosphere that the band then proceed to spend a further eight tracks taking a sledgehammer to. Mastiff use their time to set up Leave Me The Ashes… as a sucker punch, that once executed, doesn’t let up until the last note of the brutal blackened howl that is Lung Rust.

Dripping with fuzz and sinister notes, the album begins with the creeping sound of the coming darkness, with vocalist Jim Hodge resonating like Hell’s own chorus section, chanting hypnotically in a gargled, strangled tone. Then Fail delivers the punch. Shifting tempos in a huge fashion, the band burst from the speakers in a hail of blastbeats and grind fury awash with classic Slayer influenced guitar and rabid, full-throated vocals. Visceral, rumbling with dirty bass and feedback, there’s a gleeful savagery that is immediately evident.

Your brain barely has time to make the transition before Repulse smashes you round the head with a slower groove that somehow maintains the intensity and the album is truly off to the races. Mixing the slower sludge grooves that still hit with anvil heavy precision, the band do the classic move of stopping, bringing back the same riff, but slower, to great effect and as you gurn and slow your head, you don’t suspect that once again Mastiff are merely setting you up for the stuttering thrash of Midnight Creeper.

a torturous affair that articulates pain, frustration and anguish expressed in the sound of a wrecking ball…

By no means a one trick band, Leave Me The Ashes Of The Earth shows that even with such relentless fury, and believe me this album has a place in the dictionary next to the word ‘fury’, there is room to explore brutality in a wide variety of heavy musical forms. Throughout its thirty-four minutes, whether it’s the insane double bass patter of Michael Shepherd, or the scything guitars on Beige Sabbath whilst Hodge screams ‘Same old shit’ again and again, the music is not the same old shit.

There are choppy riffs with bouncing rhythms, low end breakdowns and full bore powerviolence that swirl around each other fighting for dominance, creating a relentless beast of an album that never lets the listener drift off for a second.

By far my highlight is the epic closer Lung Rust. Like Black Sabbath on a cocktail of steroids and bad LSD, the seven-and-a-half-minute stomp devolves into a cacophonous, apocalyptic howl. The thunderous drumming and squalling guitar recall the likes of Indian at their most blackened and nastiest. Almost on the verge of collapsing with fatigue, Mastiff wail and pant like a spent and vanquished beast, consumed with tension and anxiety that brings no blessed release, just the sense of finality.

Leave Me The Ashes Of The Earth brings the intensity in bucket loads. Third time has proved the charm for Mastiff as they’ve delivered their most accomplished album to date. Full to the brim with layer after layer of crushing power, this is an album, that on the first pass seems like a neanderthal bellow, but burned beneath the downtuned, deliberately murky sound is an album that paints it’s wounded screams in deft changes of style and shade.

If you want to listen to something that feels like the scene in Jurassic Park where the T-Rex roars in Dr Alan Grant’s face, Mastiff have just the ticket for you. 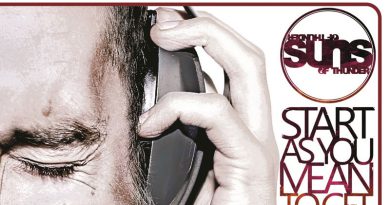