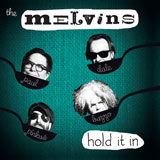 No one can deny that the Melvins are prolific, and newest offering Hold It In is in fact the 24th studio album that Buzz Osborne and Dale Crover’s distinctive and influential outfit have released since their formation in 1983. 24 studio albums doesn’t account for EPs, live albums, singles, or compilations of course; with the total number of official releases somewhere beyond the hundred mark, and more line-up changes and collaborations under their belts than any other band I can think of.  Hold It In is the product of Dale and Buzz teaming up with two Butthole Surfers – bassist J.D. Pinkus and guitarist Paul Leary. ‘The Melvins meet The Butthole Surfers’ sounds like a pretty exciting proposition; you imagine this combination of off-kilter rock heavyweights could only barf forth something innovatively bizarre and brilliant. Quite a shock then to discover Hold It In contains some of the most accessible material you’ve ever heard on a Melvins album. Occasional noisy bookends and quirky production aside, there’re essentially a lot of three-minute-mark, pretty harmless rock songs on this record.

Bride Of Crankenstein quickly fades up from out of nowhere to kick things off all chugs blazing. It oddly feels as if they’ve started with a track that sounds like it should be sitting several places further on in the running order, but it’s pretty classic Melvins and the main riffs are definitely decent. Following it with You Can Make Me Wait throws you a massive curve-ball – its twee, quirky, space-pop would be more at home on a post-90’s Ween album. This sort of weird sounds nothing like the weird that the Melvins or the Butthole Surfers are famous for; there’s nothing menacing or lunatic about it, and the whole thing comes off like a bit of a private joke and just a bit naff to be honest. Things start sounding more familiar by Brass Cupcake, but the twee pop factor is still there in spades, and you notice that Dale Crover hasn’t really had a single chance to stamp his staggered, flam-centric drum trademark on this album yet. It might be churlish to complain about the Melvins failing to meet expectations of what a Melvins album should sound like, but given that Crover is basically fifty percent of the Melvins sound, it’s disappointing that his characteristic percussion is largely missing from this album.

By the end of fourth track Barcelonian Horseshoe Pit, you get a bit of that swirling noise headfuck stuff that the Butthole Surfers liked to do, and it’s nice to hear the sound of the two Buttholes’ contribution on this collaboration, but it’s executed a bit suddenly and it feels a touch too soon in proceedings to go for that “we’re really tripping now!” vibe.

Onions Make The Milk Taste Bad is about the most Melvins sounding song on this album, largely thanks to a riff with enough breathing room in it for Dale Crover to do his thing. Sesame Street Meat is similarly satisfying in its heavy reliance on classic Melvins mean chugging swagger, but these two strong standout tracks are separated by the very different sounding, Paul Leary penned Eyes On You, and followed by the much more rad but equally alien Nine Yards.  The result is a whole section of the record that feels like a mixtape made by someone who likes to intersperse songs from Stoner Witch and Houdini with random popular rock tracks. And that, to be fair – if a bit reductive – is kind of how the whole album sounds: like a bunch of pretty familiar Melvins songs with the occasional much more Paul Leary flavoured moment rearing its head. There are some great tracks like Piss Pisstoferson, and some cool and clever segues between premium hench riffs, but I’m a Melvins fan and on the whole Hold It In left me feeling a bit cold.

There’s a sort of smirking humour about the whole thing, which arguably defines much of what the Melvins have always done, but on this occasion it too often feels a tad self-indulgent and like a joke we’re not really invited in on. Which I guess is fine if you just look at this as a snapshot of four friends from two different bands getting together to mostly have fun, and it’s not like the Melvins need to prove anything to me…but I await every Melvins album hoping it’ll be as great as A Senile Animal so ultimately it’s kind of disappointing that it’s not happened yet again.