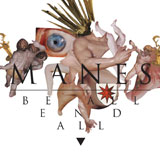 Eyeballs, limbs, shards of gold. The cover of Manes’ Be All End All is startlingly appropriate – depicting a chimeric assortment of human body parts and sharp objects, it offers a strong representation of the sonic landscape conjured by the Norwegian experimenters on their fourth LP, the first official full-length to surface since 2007’s How The World Came To An End.

Like fellow countrymen Ulver, Manes are a former black-metal band that have opted to take the path offered by technology, dealing in a quixotic combination of glitchy electronics, experimental jazz, metal histrionics and oppressive atmosphere. Samples, synthesisers and reconstructed vocals collide with shades of doom, post-metal and gothic rock, with an impressive array of moods conjured for what is arguably the most cohesive of the band’s albums to date.

The frustrated melancholy of A Deathpact Most Imminent opens the record, with harmonised baritone vocals soaring over a more familiar guitar & drum backdrop, before taking a sudden left turn into a canopy of skittering beats and manipulated fretboard squeaks, and gathering force as it lurches between the two aspects.

From here on there is a tension between the animal and mechanistic. Both glacial and caustic, Manes’ work is one of simultaneous contrasts existing in a tight, constantly evolving balance, a tension which is key to Be All End All’s power. Though bearing a passing kinship to the tone of Ulver’s Perdition City and Blood Inside, Manes display a songwriting voice that is distinctly their own, with a greater tendency towards groove and metallic guitars than Ulver’s latter-day incarnation. If anything, the main similarity is that experimental attitude, the exploration of a range of textures through elliptical song structures, a broad sonic palette and irreverence towards perceived genre boundaries, which can only be a good thing.

A Safe Place In The Unsafe is a blackened trip-hop power surge, with an eerie lullaby backdrop, feverish vocal and cavernous array of percolating synths. Blanket Of Ashes is driven by a dark jazz groove and enigmatic vibe, while the beats veer towards techno and even drum’n’bass on the horror electronics of Free As In Free To Leave. Name The Serpent is also particularly striking, with its primal rhythms and wealth of memorable hooks and riffs, not to mention the sample of a woman recounting her experience of astral projection during brain surgery.

The instrumentation is muscular and expertly executed, and while every sonic detail has clearly been meticulously planned, the record retains a combustible, elastic feel. The versatility of the vocals is particularly worthy of note – Tom Engelsøy and Asgeir Hatlen provide vocals on this LP, producing a huge range of timbres between them, with moments that reminded me of Carl-Michael Eide (Virus), Greg Dulli (The Afghan Whigs) and even a smoother, Scandinavian version of Michael Gira (Swans).

Meanwhile, the guitar riffs and licks occasionally reminded me of the phrasing employed by Katatonia’s Anders Nyström and Oceansize’s Mike Vennart. With its misty-eyed desperation and orchestral feel, The Nature And Function of Sacrificeis particularly reminiscent of second-era Katatonia (no bad thing, in my opinion). And aside from the aforementioned Ulver, the punchy, clattering electronics wouldn’t sound out of place on a record by Dødheimsgard or The Dillinger Escape Plan. But despite these perceived comparisons, this LP still shines through as an original construction, with similarities dissolving back into the tapestry of sound as quickly and quietly as they appeared.

Ultimately, as with previous Manes works, Be All End Allis not a record that can be listened to casually – it’s a complex, chaotic and deeply detailed listen that demands attention and time to unfold its most rewarding aspects. But given that time, what’s revealed is a striking and powerful record, by an intelligent and coherent musical unit at the height of their powers.