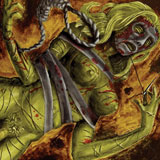 Lord Mantis’ new record, ‘Death Mask’, is a dark, violent and often unsettling ride through the human psyche. It is equal parts black metal and sludge, mixing both of those genres’ predilections for hatred and nihilism into a savage cocktail of nastiness. ‘Death Mask’ is the Devil on a bad acid trip.

Opener ‘Body Choke’ is an eight minute ride through hell. It starts slowly, a crawling, ugly manifestation of darkness and death. A mesmerising riff appears, overlaid with atonal harmonies and throat ripping vocals. It breeds ideas of rage and violence in the listener; strange industrial noises appear in amongst the riffs and the vocal filters add to the unsettling nature. It almost doesn’t sound like it was made by REAL people. And that was just for starters…

The uneasy feeling is retained throughout the record, a feeling of dread, an anticipation of the cathartic release that never seems to come. The riffs are heavy, the vocals are harsh, the hate is deep. If you stripped away the layers and baggage that comes with black metal releases, you might find this beast lurking at its core. ‘Death Mask’ revels in primal feelings; fear, hate, anger. The title track is more straightforward, grabbing you by the throat and pummelling you without mercy. Possessing less of the unsettling, and more of the violence, ‘Death Mask’ is a mangled fist in the air salute to black metal’s twisted form, albeit a kicking, screaming sociopathic one. ‘Possession Prayer’ furthers the unsettling vibe with a swaying, uneasy riff, and harsh industrial samples seeded amongst the screams.

‘Death Mask’ is a dark, twisted slab of malevolence. It is somewhat of a rarity in this day and age of ‘seen it all’ to find a record that can affect us on a visceral, primitive level. An album that can provoke feelings of fear and loathing. It is a murky mirror, held up to expose your innermost horrors to yourself. There has been a lot of online controversy about the album art, but I think it suits the sound of the record perfectly. Sure, it’s controversial and provocative but so is the music. ‘You Will Gag For the Fix’ has a delicate and mournful piano, a perfectly left field moment to keep the atmosphere alive.

‘Negative Birth’ is stark and bleak, with a startling change of pace halfway through into a brilliant headbanging black metal section. ‘Coil’ is a vicious, slow motion hardcore beatdown by monstrous entities. ‘Three Crosses’ completes the album, with ten minutes of what I realised was the sound of Lovecraftian beasts appearing and dragging humanity to insanity, death and murderous intent.

‘Death Mask’ will certainly be the most unsettling, unnerving and downright ugly record to come out this year. Lord Mantis have created the sound of primal insanity, and coated it in tar black sludge and filth. It is the sound of someone going slowly and murderously insane.