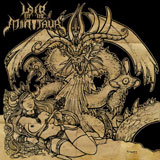 A Mongol General once asked Conan “What is best in life?” He replied: “To crush your enemies, see them driven before you, and hear the lamentation of their women”.

Well I’ll add having a beer and sticking some new Lair Of The Minotaur songs on too!

This new two song crusher released for record store day is in the same vein as their previous outputs and carries on where 2010 album Evil Power left off, your ears ringing and the taste of bloody steel in your throat. What I love about this band is that it does what it says on the tin albeit a barbed wire tin weighing in at a ton with the head of a gorgon inside.

And listening on my trusty headphones I was subjected to the title track which slaughtered my senses with its instant buzz saw guitars and war drums, this is definitely one Lair not for the fearful warrior and if you can hold out it’s worth all the spoils of war!. A truly heavy track that not surprisingly from this band is catchy as hell (hey even the most denim and leather clad soldier loves a ditty you can whistle!).

There is a great production on this release, everything is clear but not in an over polished way and as always great guitar work and vocals by Steven Rathbone who throughout has been the main barbarian in this battle hungry beast of a band.

The black heart of the stygian drakonas (try saying that after a horn full of mead) is a different type of beast, it kicks off in the same way as Godslayer but then goes in a very different direction for this battle scarred listener .A full on punishing riff enters midway into the song and nearly breaks my neck with its ferocious intent, then all of a sudden I’m caught off guard and its almost as if I was once in an Italian gore heavy fantasy film and now I’m transported, loin cloth wearing into a John Carpenter flick soundtrack!

Synth keys kick in right at the end and it’s as if this has all been a bad dream from spending too much time reading ancient stories and mythology of creatures that turn you to stone and beasts that rise from the sea. This band has perfected their sound and as with these two song releases it wets your blood thirsty appetite too much, so here’s to a full album soon. Special mention has to go to Tom Denney for his nightmare made real artwork again, he’s a long time collaborator with LOTM and this one brings those horrific visions they speak of to life again.

So raise a glass to warriors slain in battle and hail LOTM because if you don’t they know where you live and from this listen they won’t allow mercy.