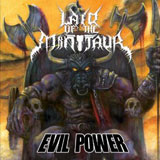 I love Lair Of The Minotaur but as I write these words I actually question whether I do indeed ‘love’ them. I thought about other things that I love in my life, and asked myself a few questions…..

And that, my friends, is why you should buy this album and then buy the albums released previously by these Chicago Metal Warrior Battle Fuck Clan of Riffs. This album has some of the amazing song titles that made the cover of War Metal Battle Master an absolute joy to read, seeing ‘When The Ice Giants Slayed All’ scroll across the LCD display on the CD player in my old car was almost as enjoyable as listening to the song itself and, for me, that’s part of the experience.

Moving onto EVIL POWER (at fucking last I hear Mr Stoned of Middle England say) and this 2010 offering from Rathbone, Olp and Wozniak is in a few different ways the quintessential ‘Heavy Metal’ album. Let’s run through a little checklist here:

1. Minotaur Imagery on the front cover and then a guest appearance by a real live minotaur on the inside cover? Check
2. Chugging riffs? Check
3. Songs, sung in first person, about things that the singer could have never experienced in real life? Check
4. Guitar tone to die for, riffs that spin and convulse and whip about your fat head like a dickhead fruit bat? Check
5. A confidence in the delivery that makes you believe that they mean what they say when they talk about witches and stamping on people’s heads? Check

It has all the things that one could wish for when asking for the perfect ‘Heavy Metal Album’ and yet I somehow find myself hoping that the songs were longer. If I like riffs and a song, I like it to go on for a bit so that when I pull up alongside the Vauxhall Corsa pilots in my neighbourhood I can open my window and make a bigger tit of myself with my music than they do with theirs… This is not possible with this album as by the time you have done your mirror, signal and manoeuvre you are onto the next tune…… Before you know it the Corsa has driven away, with a roar of over engineered exhaust pipes, you stare at its Halfords-fitted Phat Cat exhaust (or whatever it is) and lament the decision made by the band to keep this album so short (but not in a Reign in Blood way).

This album is part Heavy Metal and part Punk. The band, more than on any of their other albums, show their punk influence and I start to compare this album to Undisputed Attitude (the album Slayer released in 1996 to pay homage to their punk / hardcore influences). This is a good thing, the drums on songs like We Are Hades and Metal Titans are especially muscular and give this album a depth and a more varied feel not present on most of this year’s releases to date.

It is clear that this band do not take themselves too seriously as most would describe their imagery, song titles and lyrical structure to be heavy as fuck, but also a little bit tongue in cheek – their liner notes which instruct the rest of the genre to fuck off (or something like that) show a band seemingly unhappy with other bands that occupy a similar stylistic space as themselves and seemingly ‘careless’ in their assault upon them.

So, therefore, they will not take offence if I likened this album to a box of Riffin’ McNuggets (if you are a lawyer for a certain fast food chain, please fuck off) – small bite sized pieces of undeniably tasty riff-food, rather than a massive Heavy Metal pie. I for one am more than happy with Riffin’ McNuggets for now (I particularly like to dunk them in bdooooooooooooomq sauce) but I hope the next course is more substantial as these guys are fucking GREAT cooks (see what I did there?). 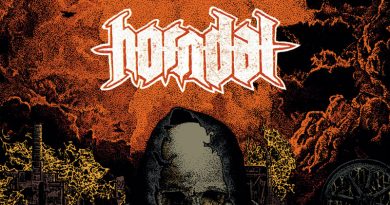