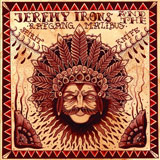 Imagine, if you will, the expansive psychedelia of Blues For The Red Sun-era Kyuss, minus the heft , filtered through the gritty alt-countrified garage rock of Woven Hand and with the wild and untamed Jeff Buckley on vocals. Sounds fucking beautiful doesn’t it?

This oddly-named ensemble hail from Sweden and, oddly, do not number Jeremy Irons amongst their members. Instead, their frontman goes by the name of Karl Apelmo and it is he who possesses the beauteous Buckley-esque pipes. He’s probably never been the chief baddie in a Die Hard film but he can sing like an angel and scream it up with the best of ’em when the mood takes him. Joined by fellow guitarist and wah-wah abuser Micke Pettersson, provider of the warmest of bass tones Viktor Källgren  and tub-thumper Henke Persson, the quartet have been around in one form or another for ten years, but Spirit Knife is only their third album – and their first for the well-respected Small Stone label.

The tunes on Spirit Kniferun the gamut, from gorgeously spaced-out fingerpicked acoustic numbers through balls-out trashy classic rock laced with needling icepick guitar to ebbing and flowing psychedelia that blooms in its own sweet time and all points in-between. Yessir, Mr Irons and these here Malibus are quite the individualistic outfit.

Fog By The Steeptakes us in, opening with moody FX-drenched chords before a searing wah-heavy lead and some angry ripping fuzz kicks a hole in the mood and Apelmo busts out with his tremulous banshee yowl. The riffing here is pure Soundgarden, circa-Screaming Life but with that raw garage tone giving an ear-bleeding edge. The band plays with dynamics some, taking it down to clean guitars, a reverb heavy lead, Apelmo coming on like a breathy John Garcia channelling Buckley and the rhythm section keeping it motorik until it all amps back up again to finish.

As far as introductions go, I’d call it hair-raising.

Persson nails a driving beat to the floor for Wind Seized as taut barbed-wire guitars drill into our eardrums and Apelmo approaches an eastern air with his ethereal vocal. Later on we get more wah-wah molestation and, well, just some fuckin’ boss dynamics. Seriously, it’s thrilling.

The twinkling, silvery Sworn Collision is the number most universally reminiscent of Jeff Buckley here but, you know, that really isn’t a bad thing. The band has a rougher edge more akin to the sound on the Mystery White Boy live collection, though, than the polished twinkle of, say, Grace.

Now, for me personally, Once Levitated is a highlight – a beautifully written, compact tune that I guess you could legitimately call a pop song, it has rock-solid dynamics, a wonderfully aching vocal performance from Apelmo, some beautifully plangent guitar parts and perfectly placed organ from guest performer Patrik Kolar. I keep coming back to this one.

Kolar sticks around for the next number, the pounding garage psych of Clang that, again, plays with the soft/abrasive dynamic pretty damn successfully and really makes an impact after the softer tones of Once Levitated.

Deep Hardened Woods is the spaced-out acoustic number mentioned earlier and the relentlessly cyclical nature of the fingerpicking combined with a vein of just-on-the-edge-of-hearing guitar feedback running throughout gives the track an odd tension that contrasts so nicely with the gorgeous vocal.

Penultimate track Point Growth veers from a slow-burning cavernous ambience into an MC5/Stooges riff and solo-rama so stealthily that you really won’t see it coming, and final tune, Spirit Knife itself, switches between hypno-stun rock and crystalline intertwined guitars – reminding me strongly of Whitewater, one of my favourite Kyuss numbers – twisting and mutating across its length and never once losing my attention or being anything less than thrilling.

The name may be a bit of a headscratcher, but you really do owe it to yourself to give Spirit Knife serious attention, and I’ll tell you something else, I’m willing to bet they’re dynamite live too. Here’s hoping we find out soon eh? 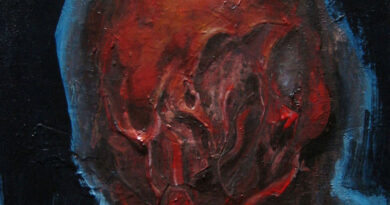