Cult leader, musician, whole food enthusiast, dirty old man…the infamous Father Yod (Google him and prepare to have your mind blown) was many things, and has over time become something of a touchstone for psych rock warriors everywhere. Hypnodrone Ensemble – the revolving door troupe spearheaded by Nadja‘s Aidan Baker and Eric Quach of thisquietarmy – are the latest in line to pay affectionate, if not a downright cheeky, tribute to the man with artwork, and title, that point in the general direction of his looming spectre on certain shady corners of pop culture. Ironically the etheric sonic journey housed in all these references probably provides more tangible spiritual nourishment than The Source Family ever did.

Living up more to the ‘hypno’ part of their name than the ‘drone’ part, Baker and Quach had previously corralled various contributors into the studio for long improvised ‘live in the studio’ sessions on previous releases, but impressively on Gets Polyamorous, everything was pieced together remotely. Listing fifteen players, it’s actually staggering to think music this fluid was built piece by piece, as it really does feel like an accurate representation of a group performance, by a collective of musicians bouncing off each other in the moment.

So what does it sound like? If your fears are, given the name and cover, this might descend into the kind of aimless faux Eastern inspired, sitar laden indulgent psychedelic acid rock bollocks, you can breathe a sigh of relief.

Essentially feeling like a series of developments of textures and moods, this is music that somehow pulls off the difficult trick of being both background and foreground at the same time. Easy to get lost in should you give your concentration over to it and play it at the right volume, but just as pleasant as background music should you need something rhythmic to carry you through whatever you’re doing.

layers of sound smear themselves over the percussive bedrock…

Mostly anchored by what often sounds like multiple percussionists gently locking into groove with dub inspired bass (Ongnamo and Wecker exploit this influence with particularly enjoyable results in the late section of the album), layers of sound smear themselves over the percussive bedrock. There’s an often breathy quality to the rest of the instrumentation, as you’d expected from a group with ‘drone’ in their name, allowing it to float in many directions, often almost imperceptibly at first, until before you know it, a piece has developed into something much more engaging.

While repetition is obviously at the core of much of this music, given its’ genesis from looped recordings, it always feels like it is actually going somewhere. It never quite hits a huge boom crescendo, or sinks away into nothingness, instead flowing organically. It’s also spacious, widescreen music – you can focus on a different element of each track every time and hear something new. It feels like an incredibly well balanced musical journey where each constituent instrument is allowed to mutate at will, and in harmony with the rest. Truly an ensemble, a unit where it feels like everyone is working together.

While best enjoyed as entire listen rather than individual tracks, Gets Polyamorous feels very tastefully structured with each piece continuing the gentle momentum of the previous, but having individual character. There’s a very bright feeling to the music that’s as present in the motoric, shimmering push of Biglove as it is in the sombre pacing of Windspiel. A strong argument for polyamory, albeit in musical form. 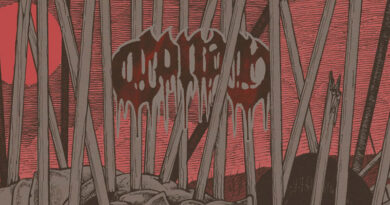