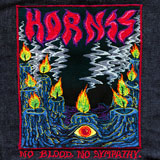 I don’t know if it’s the sunshine after the days of torrential rain here or maybe because it’s Friday, but this is what I needed to hear! HORNSS does not beat around the bush, this is high octane, beer drinking music! There is a lot going on this record. It’s like if Fu Manchu got too paranoid from pot and switched to whiskey, beer, and Robert E. Howard novels. I hate to use tags, but this is “stoner rock” with a very strong metal influence, however it is catchy and memorable enough to appeal to fans of both genres; and upbeat enough to avoid the “Doom” tag. That being said there are some riffs that would not be out of place on some of their more doomy contemporaries’ albums, especially the opening riff to ‘Maker Of The Moons’.

Having song titles such as ‘Heir To The Pickle Throne’ and ‘Ejaculating Serpents’ it’s easy to see they are having fun with this and not trying to be overtly “cvlt” or “necro”. There are some big riffs on the 12 songs that encompass ‘No Blood, No Sympathy’, the power trio’s debut album, and HORNSS are not afraid to experiment. Hell in ‘Haunter of the Dark’ I get a big Melvins vibe! While at times this can seem like a lack of focus, the album never seems forced. It is straight up rock and roll music, not afraid to ware their influences on their sleeves (or sew the patch on their denim vest), but talented enough to take all this and mix it into a sound of their own.

Having formed in 2010 HORNSS has been around for a while honing their skills sharing the stages with acts as varied as Fatso Jetso and YOB. You can feel that this has influenced HORNSS all over ‘No Blood, No Sympathy’. While the album may display their influences it never strays too far from a core sound the group has made. I find ‘No Blood, No Sympathy’ varied enough to keep me interested, catchy enough to keep my head bobbing, and fun enough to make me come back for more!