To say David Brenner has a prolific work rate would be something of an understatement, it’s at Mike Patton levels of prodigiousness. Having only reviewed Gridfailure‘s Sixth Mass-Extinction Skulduggery II and Walking Bombs’ Tears We Should Have Shed (on which Brenner made a guest appearance) I’m aware I’ve barely scratched the surface.

Now we have this latest release featuring New York Trumpeter Mac Gollehon, a man who has collaborated with some of the biggest names in the rock/pop world including David Bowie, Grace Jones, Duran Duran and Billy Ocean to name just a few. Two big selling point for me were the promises of ‘Prohibition-era speakeasy and The Great Gatsby vibes merged with horror/slasher and gritty crime films of the 1970s/80s‘, as well as the inclusion of Dan Emery (best known for his work on Anti-Corp’s excellent The Magnolia Sessions) who helped master the album.

Evisceration Guest List opens the album in a typically uncompromising Brenner fashion. It’s as if Slayer’s Hell Awaits has been put through a free jazz filter and leaves you pondering whether this really is the same guy who played on Get Outta My Dreams, Get into My Car. Transient Fault recalls Miles Davis’ controversial Bitches Brew album the way the sax seems to float around in a disembodied fashion while chaos erupts around, making it the musical equivalent of Naked Lunch. It certainly wouldn’t be out of place during the more surreal nightmarish moments of that movie.

Crime Scene Designers features disturbing lyrical content ‘Another body on the left, and even more to the right, we’ll up the level of gore’, matched by music that makes you think you were in a pre Rudy Giuliani New York back alley. A child’s bedtime lullaby this is not. A Diet Of Maggots (nice) may intonate a Cannibal Corpse style track but thankfully features heavy Sunn O))) style drone (Black One era when they were genuinely pioneering). For the full disturbing effect I recommend playing it at night on headphones.

Roaming Blackouts features heavy rainfall, grimly distorted vocals, relentlessly pounding drums and trumpet/trombone/dideridoo, amazingly this is probably the most threatening a didgeridoo has ever sounded. When the apocalypse hits, I’m convinced this will be the soundtrack. Fracture Mechanics implies a futuristic tone with a creepy Blade Runner ambience. In fact there is an industrial glint but its far more subtle than say Fear Factory and Ministry.

Gusher though not the shortest track on the album is certainly a lot more concise and atmospheric, the menacing tone is dialled down a bit making for a necessary and brief respite from the unrelenting desolatory aesthesis. El Tamblor (The Tremor) is a slow burner and hence the most intriguing track on the album. There is a pulsating almost krautrock-esque repetitiveness present and such is its rhythmical nature, I wouldn’t have been surprised to hear Tom Waits guest on it, in fact that would have been amazing. Its certainly in the fine demented tradition of What’s He Building in There. Fantastic.

Pieces returns to the sonic noise assault we’ve become accustomed to before reaching the shortest track on the album Harakiri Afterparty. Harakiri is a form of Japanese ritual suicide and thus seems a suitable conclusion to what is an intensely bleak listening experience.

Dismemberment Cabaret was definitely unsettling and challenging, however because I have been listening to Ethan McCarthy’s Many Blessings project a lot recently, I was probably a lot more predisposed to it than usual. The album will appeal to fans of uncompromising experimental noise outfits such as Hanatarash, Whitehouse and Nurse With Wound. 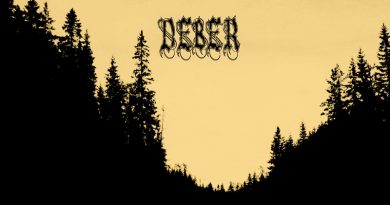