Thirty years. Three decades. A trio of decades. Either way it’s a long time. For most of us, I doubt we’ll have friendships, marriages or working partnerships which will last for three decades, let alone be bandmates for such a long period of time, yet still actively working together creating new ideas and musical journeys.

Well, Dean Thom, and Phil Considine are living proof that it can be totally viable, and through doing so, they have created the new project Great North Star. I say ‘new’, but I should elaborate. Although Great North Star are releasing their first vinyl opus on the 23rd August through The Acid Test Recordings, this thing of beauty has actually been out, and available for a year already. It was actually released last year on digital platforms, during the end of the first UK lockdown.

Unfortunately, if you can think back to last July, the UK was reopening its doors after the first covid lockdown, and in doing so, this incredible release went widely undetected.

Well, fast forward a year, and here it is again, resurfaced, and with a full physical release, it will hopefully be available to purchase in the coming days. That being said, you will have to act quick, as its only got a limited release of 100, and copies will go faster than a politician’s morals when left unattended for more than five minutes, it would seem.

Great North Star was actually birthed in Manchester, the UK, and is a prime example of what happens when you keep two incredible musicians in the same place for any length of time. Ultimately, Great North Star is a duo project, and sounds as such, it’s predominantly in the sound of two instruments, entwined, working in unison, to create a wonderful vision, which will demand your full attention, to really fully experience the sublime craftsmanship that’s been involved.

Over the eleven tracks, there is a running theme, its ambient, serene nature is compelling, and its whole essence is a sense of emotion and vibe, over any angst or disruption.

The ambient electronic soundscapes, with interwoven guitar, are light and airy, and take us on a journey of discovery…

There are tracks, such as the album opener, Gilesse 581g, where even from the opening bars, I’m instantly reminded of Radiohead. To clarify, I don’t mean the early incarnation of Radiohead, all indie and grungy, and not even that middle conundrum in their career, where it all went off the rails, but more the Radiohead of modern times, where they’ve taken on all of the different elements, and made something far more mature, considered, and versatile electronically.

The ambient electronic soundscapes, with interwoven guitar, are light and airy, and take us on a journey of discovery. Even if you aren’t into this style of music, you can’t fail but be impressed with just how wonderful and rich the whole affair is. With the mastery of the instruments being used to form the narrative, it is simply phenomenal.

There are darker moments too, such as on Deus Ex Machina, where it becomes slightly more pensive, darker, and slightly unsettling. This is offset though, by tracks such as 750, which makes you feel like you’re being taken away sonically, and it’s far more an experience than just being a passage of music. Then as Getting A Fix, track five, plays through, I’m whisked into the realms of Explosions In The Sky, and with the inclusion of the percussion, it adds another layer, and breaks things up, to a certain degree.

I’m particularly drawn to track six, Song Of The Ocean, at how the guitar work ebbs and flows, it actually feels like the gentle swirl of an oceans surf. It’s like being transported to the water’s edge, and watching it roll in, and then gently roll out again. Simply divine. All the way through the album, it feels like every single element has been meticulously considered, and even right up to the closing track, Birds On The Dee Estuary, it feels light, airy, and timeless. Nothing is rushed and comes across as completely calming.

Coming to this album a year after its initial release, I feel like I’ve been missing out, and now is the time, so I’ve already ordered myself a vinyl copy, to keep forever. Even replaying the album over and over through my headphones, those rolling notes, without another sound hanging in the air, makes me feel so complete and at peace with myself, and my surroundings. Its more than just an album, it’s a sonic experience for the soul. 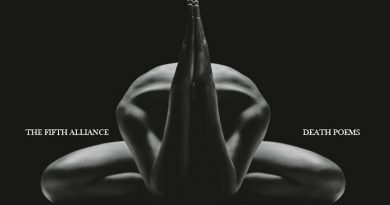