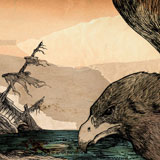 Metal should never take itself too seriously. Sure, it’s good to be ‘brutal,’ but usually behind all the heaviness is a bunch of guys having fun. Guys like Greenhorn. For them it’s all about delivering heavy riffs, nasty tones and wonderfully weird song titles. On Doomhawk they do what they do best: deliver riff after riff of sludgy, doomy goodness.

Like a monstrous slug crawling through primordial swamps, opener Horse Cock lurches forth. I might be mixing animal imagery here, but it lends itself to the comparison. The guitars are thick and fuzzy, delivering simple but pounding riffs. Coupled with slow drums, you might expect low, guttural vocals typical of stoner doom. Instead the high rasp of bands like Weedeater gives the music a ferocity that lower registered vocals cannot always achieve.

The band stays firmly in sludgy doom, but they do vary their sound well. Punk is married with down and dirty breakbeats, allowing the bass to raise its nasty head. Generally the bass is low in the mix, a shame considering the nice grit it adds when given room. But the six-strings are bass-heavy themselves, giving Horse Cock a good coating of slime.

As I Stand Laughing Over The Crushed Remains Of My Defeated Enemies shows Greenhorn at their grooviest and most ridiculous. Opening with a minor quote from Man Of Steel, the song clearly doesn’t take itself too seriously. Although the title, one stop short of Nile’s infamous Papyrus Containing…, should have given that away. Greenhorn bring the tempo down for another riff that induces involuntary gurning. The guitars are palm-muted and sludgy whilst a high lead guitar provides greater range. A nice addition, but the melody is a little too obviously ‘evil’. In contrast is the spacious, discordant break towards the song’s end, excellently adding a melodic frame around which the bass can writhe and emphasise the groove. Greenhorn close the song well, with an amusing reduction in tempo as they repeat the main riff. The repetition is perfectly judged, going from heavy, to funny, to heavy again.

The third track, tactfully renamed Driven (for the original title, just listen to the chorus), has a nice southern rock’n’roll vibe. It’s a song to blast in your car whilst driving across the Arizona deserts. Greenhorn opt for a classic blues lead here, heavy on the Clutch (if you’ll pardon the pun), but with that same reliable dirty doom. The verse’s sparse chugging contrasts well with the busier chorus. Again, the vocals are ferocious, making the mundane chorus’s delivery hilarious and brutal. The song’s second section abandons the bluesy groove for a straightforward, four-to-the-floor assault. It is almost a shame to leave the main melody, even for a few seconds, but it leads into the final chorus well. All in all, Driven keeps on rolling like a great Southern behemoth.

Doomhawk closes with Kingdom By The Sea, a solid doom piece that conjures subaquatic Lovecraftian ruins. The guitars are slow and chugging, the drums surprisingly active and heavy on chinas. Though the harsh vocals remain wonderfully filthy, the clean singing on Witch’s Bridle from Greenhorn’s previous EP returns. Sounding like Cathedral’s Lee Dorrian, its mimicry of the lead guitar prevents it from being as powerful as in Witch’s Bridle. However, its combination with increasingly filmic leads and shifting, swaying riffs sounds like a merciless sea swallowing a kingdom.  Determined not to end on a sombre note, however, Greenhorn finish with a final ‘track,’ Binoculars. Featuring another short, ridiculously out-of-context quote from Man of Steel, it brings the album back full-circle.

Doomhawk is a filthy beast of a release, never letting up on the gargantuan riffs. The vocals suit the tone perfectly, capturing a sheer ferocity that oozes through the speakers. It’s music for growing beards, chopping wood, and crushing foes. Along with bands like Victorian Whore Dogs, the south-east seems to be mastering the art of combining crushing grooves with silly song titles. Maybe it’s something in the water.