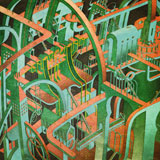 Starting from very humble beginnings, Sweden’s bluesy rock quartet Graveyard have grown significantly in stature over the past few years, thanks to their no nonsense live shows and spirited studio output.

Now a recognisable name on the very hit and miss, but undeniably massive, Nuclear Blast Records, it’s up to Graveyard to cement their musical career with their fourth record Innocence & Decadence.

After the entertaining but largely unanimated previous opus Lights Out, it is a welcome surprise to see things get off to a thunderous start with Magnetic Shrunk. The song has the same enthusiastic flair as fan favourite Ain’t Fit to Live Here and creates an instant impact for a band clearly not content to peter out with time.

Debut single The Apple And The Tree follows and it’s evident why this has been chosen as their first single with one of their most memorable choruses to date and a typically moody atmosphere. This song is also a great example of how in sync each member has become alongside new bassist Truls Mörck, with his bassline grooving perfectly with drummer Axel Sjöberg and the familiar guitar tones of Joakim Nilsson and Jonathan Ramm.

Of course, no Graveyard album would be complete without hearing about Joakim’s troubles with women and the morose Too Much Is Not Enough may be his best yet. Showing Innocence & Decadence softer side, these moments highlight the fantastically melancholic side of the band and in this instance even include some soulful female vocals.

Like Lights Out before it, this is not a perfect affair and tracks such as Can’t Walk Out don’t quite have the instant impact that their older material has with the effortless knack of achieving. Although this is the case, in no part of the album can the musicianship itself be faulted with a tight and clearly talented performance from each member.

Rounding the album off is some quite frankly mad artwork of a working society, presumably, to complement the more social and political side of their lyrical output. This is a definite stand out with its unusual choice of green, orange and yellow which certainly gives the band bonus points for not playing things safe.

Graveyard have created another solid slab of bluesy masterwork that sees them continue to defy the dreaded and gimmicky term ‘retro rock’ and be embraced for their own sound.