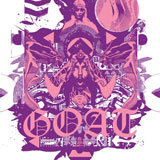 If you’re unfamiliar so far with the Swedish musical phenomenon known simply as Goat, then I really do hope that life under that giant rock isn’t stinking too much of your stale weed and dusty old albums. Smashing into our global weird-beard consciousness in 2012 with the stunning and surprise-laden ‘World Music’, Goat returned every single listener to a world of ‘70s US cop dramas, voodoo-enchanted campfire dances and tribal, yet cheerfully Amazonian rhythms.

‘World Music’ crept up on most like a fox in a balaclava, but yet it’s reach was so very vast; being covered and appraised by everyone from The Sleeping Shaman to The Guardian is no mean feat for such unprecedented sounds so mysteriously forged in Korpolombolo, Sweden. The astounding thing about ‘World Music’ was that it didn’t fit into any cleanly-defined bucket – you could utter ‘retro rock’, ‘jazz’, ‘soul’, ‘funk’, afro-beat’ or ‘reggae’ amidst it’s fornicating glamour and you would neither be quite correct nor entirely wrong in your chosen description. In many ways, it was their overtly catchy weirdness that saw them embraced most warmly by the stoner-rock and doom communities, hungry for something lively and fun to soothe their blackened souls. Appearances at the likes of Supersonic and Roadburn festivals ensued and the hype around this most bizarre and obscure three-piece grew like vines on a summer’s day.

Fast-forward to today and Goat have returned with a short and simple stop-gap 7” release out on Rocket Recordings loosely entitled ‘Stonegoat’. Both the wah-wah-drenched title track and the supreme boogie of B-side ‘Dreambuilding’ are no radical departure from the ‘World Music’ style that so fascinated all from the mountain Sherpas to the city laptop-tappers. ‘Stonegoat’ picks up slightly more of the band’s classic rock style – echoing the likes of Can, Cream, Hendrix, later-era Zeppelin and even sprinkled moments of Motown. The fuzzy guitars and street-style drumming are sure fire to plant you firmly in front of a Jim Kelly movie with a Cuban cigar in one hand and a large Old Fashioned in the other.

‘Dreambuilding’ only, err… builds on this dream with what sounds like an ensemble of 58 variously-pitched cowbells meshed over some delicious funk riffs and those righteous child-like vocals which somehow manage to retain both a male and female feel. Both ‘Stonegoat and ‘Dreambuilding’ aren’t quite as densely layered or as intense as some of the ‘World Music’ material, but what they lack in hypnotism, they make up for in simple structuring and out-and-out post-human levels of fun and worldly abandon. Both feature guitar solos of glorious freedom and fuzz in accompaniment to some of the most original percussive sounds and feet-shuffling basslines produced in decades. If you liked ‘World Music’ then you’ll enjoy this short but sweet voodoo hoodoo of a follow-up too.