GNOD are back and perhaps have been taking the advice of Grover Crow – ‘Let’s not think about it, let’s just do it’ (Ponders, Russell Hoban). Their stated intent with this release was to get back to the DIY ferocity, a part-step away from the cerebral work that has earned them much critical praise over the years. Being GNOD though there is of course plenty of meaning-making mischief, or maybe mischief-making meaning.

Those partisans of the sparse and icy dub of Europa or A Body from 2018s Chapel Perilous may be disappointed, for La Mort Du Sens shares more with the two bookends of that record – a celebratory motorik destruction that rattles your teeth loose. Mr. Shine tells us they ‘banged it all down live’ and I can readily imagine these songs smashed out to an ecstatic crowd.

Regimental opens with a cacophonous piece of mischief, subverting the idea of a coherent message, before dropping into the repe-repe-repetition of churning bass and percussive overload (two drummers!), counter-pull of guitar and of course vocals. This noise rock mutant can only break into more of the same, priming us nicely for the post-punk boogie of Pink Champagne Blues. Terse and concise, this is about as close as GNOD have got to an upbeat party song, massive and filthy tones, and even-more-urgent drumming, this is a proper banger.

a celebratory motorik destruction that rattles your teeth loose…

The Whip And The Tongue brings things back down a little, that creaking machine of 21st century life under terminal capitalism making itself heard. Somehow both teeth-grinding and drifting, this tasty little number also finds room for some sax soloing among the rhythmic/harmonic elements and personal/political critique of oppressive control. Very GNOD. More ambiguous celebration in Town, where appropriately things take a turn for the industrial. The rudest bass dirge of the album is a high point, but over the course of the song’s five minutes, I do start to feel itchy for a second idea. Still, I imagine that is partly the point.

Coming out of the slight downer, you might expect Giro Day to be another party-starter, I mean it should be the best day of the month, right? But something has gone very wrong, among mounting discord and anxiety it becomes clear that the album’s closer is a twelve-minute nightmare. At times the fog clears a little, but it comes back in uncomfortable layers of noise, like all your worst days. Now I remember GNOD as their R&D incarnation clearing the room at the Exchange some years back, and if this album is a fair taster of the upcoming gigs they have planned, then I wouldn’t be surprised to see some empty floors… What a place to leave us!

Having said that, I am looking forward to seeing this lot soon in whatever form they choose to manifest, and I would certainly not write off this album just because the rotters haven’t left me feeling great joy for the world. No time for beard-stroking on this one, and while I do enjoy that side of GNOD’s music, it’s great to hear them cut loose in such fine fashion. Time will tell how much I come back to this album in the long run (and predictably I was too slow to get one of Rocket Recordings LP’s) but I’ll certainly be drawing on its reckless energy through the next few dark months. 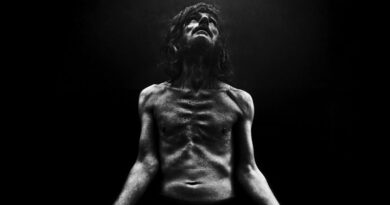 Review: Process Of Guilt ‘Slaves Beneath The Sun’