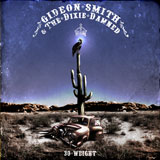 Over the course of the past 10 years or so and with 2 EPs and 2 previous albums to his name, Gideon Smith has assumed an almost legendary status…even getting his own tribute album. Smith is an outlaw, he operates on the fringes of rock and roll, steadfastly shying away from playing “the game” and that in itself immediately draws people deeper into the fold with his heartfelt amalgam of stoner, blues, country, Goth and rock and roll.

So 2011 sees the 3rd, very long awaited album drop. Without a band per se, Gideon has been assisted by a number of friends to pull together a remarkable piece of work. Aside from Smith on vocals and guitar, the mainstays are Phil Durr (Big Chief, Luder, Five Horse Johnson, Giant Brain) on guitars, bass….etc and Eric Hoegemyer on drums, who also produced this very fine affair. Not that you would think this is anything but a cohesive band playing here and the consistency of the material with the previous releases serves to highlight Smith’s strength as a song writer.

Opening track “Black Fire” is a slinky rocker fuelled by a tasty little slide riff while “Ride With Me” boasts a potential chorus of the year backed up by Sue Lott’s (Luder, Slot) seductive backing vocals. “South” pulls together Smith’s swampy blues and blends it with Danzig’s darker hewn gothic tendencies. Smith’s rich baritone has always been an impressive asset but here he shows a greater sense of depth in his choice of melodies than on previous albums and a greater awareness of the power of a strong chorus.

On “Love Of The Vampire”, Smith kicks the dust off his boots and lays down an ass kicking rocker that isn’t a million miles away from “White Zombie’s “Black Sunshine” but painted a darker shade by Smith’s dark voodoo magic. At this point it should be pointed out that the production shows a far greater level of texture and creativity than past albums. Guitar tones change and weave around each other as thick syrupy fuzz merges with cleaner, bluesier tones. Overall there is more space in the production that somehow serves to make the whole sound more expansive.

An album highlight for many will surely be a stunning reimagining of Saint Vitus’ classic “I Bleed Black”. Eschewing much of the oppressive heaviness of the original, Smith actually succeeds in making the song darker and, well, plain evil…which is ironic as Smith doesn’t actually have an evil bone in his body. The result is akin to Chris Isaac jamming with Samhain if your minds can stretch that far. On the strength of this track alone, should Wino ever choose to jump the Vitus ship they needn’t look too far for a replacement.

Smith channels his inner Cult on “Do Me Wrong”, another of his trademark mid paced, blues inflected rockers that owes a debt to the “Electric” era but swaps the faux biker tendencies for a genuine dust covered world weariness. “Born To The Highway” kickstarts the motor on another Danzig-esque ride through the wastelands, revving the engine on another slice of greased up biker rock.

Another album highlight comes in the form of “Feel Alive”. Contrary to the title, Smith still sounds as though he’s pulling from the darkest corners of his soul as he states “on demons’ wings we’ll fly”, yet the song boasts one of the strongest choruses on the whole album. This is a darkness to be embraced and channelled as opposed to wallowing in it. The same is true of “Shining Star” which brings the mood down a whole notch as gloomy organs vie for space with swampy acoustic flourishes and lap steel. Smith’s rich voice regales us with a tale of his “beautiful girl” and there is a delicate beauty in the apparent sadness.

There’s more irony on “When I Die”, a gentle acoustic/lap steel driven country influenced piece that actually succeeds in sounding far more uplifting than much of the rest of the songs here. The restraint in Smith’s vocals here display the true breadth of his vocal abilities. Imagine Guns ‘N’ Roses “Patience”…but without a whiney prick singing!!!

The album also ends on a high note on “Come And Howl” as Smith digs further back into the roots of rock and roll with a tune that’s part swing, part rockabilly but retaining the usual heavy rocking tendencies shown through the rest of the album.

It just goes to show that if something is good it’s definitely worth waiting for. Smith may not be the most prolific artist around but when he drops a bomb the echoes resound through rock and roll. Here’s hoping he’s able to assemble a band capable of doing this material justice so he can hit the road and get back to where you truly come to believe he belongs.

Listen to ‘I Bleed Black’ taken from ’30 Weight’ below.