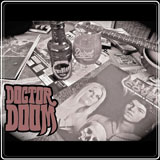 DoctoR DooM‘s DoomO immediately tossed my mind back into the transition of bodily chemicals from boyhood into manhood. It immediately reminded me of watching the 80’s animated film ‘Heavy Metal.’ I envisioned sports cars flying through space, driven by a mulleted man wearing huge black sunglasses. Their songs shoot sonic beams through the vast cosmos: an invitation from earth to all who might be listening out there in the deep reaches of the universe. Who might reply? None other than an evil race of pig-faced extraterrestrials, bent on human discomfort, of course! Doctor Doom’s debut trio of songs is quite exciting, and fills the bones of my inner ears with eager nostalgia.

When music speaks to me, it tends to create cinematic visions in my mind. And when listening to DoomO, these visions came to me quite quickly…. By the closing of the second track, I was seeing some climactic gun-slinging standoff between the heroes of the story (in my mind) and the forces of evil (also in my mind). These visions came to me, not from the lyrics, but from the overall vibe the band gives off. And whatever unnamed magic it has, it comes off in waves.

All of this band’s elemental influences of classic rock were tossed together, with their own sludgy attitude, into an alchemy pot and what came out was greatness—short, sweet, greatness. Three tracks just don’t last long enough…. Time for round two!

On the second go, I heard a distinctly David Lynch flavour. One of these tracks would fit perfectly well in one of his films; perhaps in some scene where a man is speeding down an empty road in a black car with a cindering cigarette hanging loosely from his lips, wearing an expression of morose attitude on his face, lining it deeper with time’s weather-markings. Maybe he’s got something in his trunk to ditch, because (in my mind) I’m seeing the trunk’s lid popping open ever so slightly, and fingers slipping out to drop a scrap of paper (perhaps a note—a plea for help) onto the road burning past beneath them….

I’d enjoy a full album from this band one day, as I’d like to see where these songs might take the story-yarning side of my mind. For now, I’ll enjoy this short excursion into nostalgic bliss. Better to have just a little than none at all, eh?

To be honest, I don’t have much of this genre in my library of music, but Doctor Doom is a welcomed addition. And maybe I’ll do better to pay attention to this genre, now that my interest has been piqued.