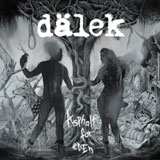 Congratulations, you might be reading the very first review of a hip-hop album on The Sleeping Shaman. We can’t help it, we dig the sound of Dälek, because it rocks harder than many bands with guitars. Let’s check out their latest effort titled Asphalt For Eden.

Dälek has been apart for a good five years and has not released anything in six. This record sees the band reformed but also reshaped into a new Dälek entity, creating a new record that elevates hip-hop to its next level. The most amazing thing is that Profound Lore, normally known for its good quality black and extreme metal roster, has signed the group. Let’s ponder that for a second. This is part of the reason we’re writing this and you’re reading this. It’s not a complete new thing, earlier the group was on Mike Patton’s Ipecac label.

The other part is the fact that Dälek is simply out there when it comes to hip-hop. Merging soundscapes, noise and dark ambient with beats into a unique, dark sound, the group is in a way hip hops answer to Godflesh. OK, let’s not get into a hissy fit. The sound of urban decay and the concrete jungle can take many forms, the UK industrial metallers is one shape it can take. Another one is produced by this New Jersey rap group.

Did they become mellower with the years? No, just one verse in on Shattered tells us enough on that front. The words “Impaired vision, like the world got cataracts” say enough about the perception of the state of the world around us in the eyes of MC Dälek. The hazy, blearing background music expresses the same, but in a non-verbal, sonic way by its off-sounding tone. It’s interestingly enough the music that emphasises the story and helps to tell it, it’s not merely a beat-backdrop to spit the words over, but a harmonic part of the whole. Its unnerving sound reminds you that Dälek have some interesting influences, little bit of Velvet Underground anyone? Similarly the conscious lyrics on Guaranteed Struggle pierce through the misty ambient music that envelops the beat and takes off its edge. The words never dull though.

A sense of illumination overwhelms you when listening to the track Masked Laughter (Nothing’s Left), which feels like that moment when all is revealed and the lesson is learned at the end of a play. There’s a sense of finality to this track, maybe even a bit of surrender to that world burning around us. On Critical we move more into the realms of traditional hip-hop, where for me the band more or less seems to show their roots with the conscious sort of word play that you can find with KRS-One and Public Enemy. It’s hip-hop that’s out there to change thoughts, to impact people’s lives, not to just give some form of entertainment. It makes the track 6dB stand out even more, this instrumental beat feels like you can use it yourself. It offers a basis for singing or rapping, it’s your spot on the album to shine.

From here on the album seems to slowly wrap up its impact, with another fiery ranted rap on Control (though never losing control and grip). Musically this track is like standing in the middle of traffic, with hectic sounds all around you. On album closer It just is, it all winds down in a sense of surrender or even despair. Softly spoken there’s a glimmer of hope somewhere in the reverberating sound and the slow, dark beats. There always is hope, as long as we learn to open our eyes.