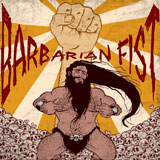 I will be the first to admit that I can be rather shallow and one dimensional when I want to be. As much as I try not to be, I find myself more and more being one of those ‘I know what I like, and I like what I know’ kind of guys. Perhaps it’s that the years are starting to weigh heavily on my shoulders, perhaps it’s just that I have simple tastes.

Either way, when the two track demo by Norwegian power trio Barbarian Fist landed on my doorstep, along with a bio that tells me that Alexander Mora (Guitar/Vocals), Per Georg Krokstad (Bass) and Petter Haukaas (Drums) “strive to make music that will make you less inclined to take a bath, more likely to ingest large amounts of beer, as well as instantly grow a magnificent beard(regardless of gender).“ Every one of the check boxes in my mind got ticked off.

Instantly, my mind began to imagine of some kind of Grand Magus/Manowar hybrid; Squiddly guitars, triumphant riffs, high pitched screaming vocals. The odd artwork of a cartoon barbarian squatting on a pile of skulls, seemingly rubbing his nipples, made me think that this is either going to be a) So appallingly rubbish that it will be brilliant b) So appallingly rubbish it won’t even last one spin or c) Just plain hilarious. Doesn’t matter though, I am compelled to give it a go.

The first track is ‘The Whorelord Cometh’ and it opens exactly how I would expect. A quote, no, sorry, THE quote from the epic Schwarzenegger movie Conan the Barbarian (And if you have to ask what quote, then you may be reading the wrong review). So I’m waiting for the obligatory thousand mile an hour guitar opening… which doesn’t arrive.

It starts with a slow, simple intro that just bursts into a doom laden, down tuned, plodding, fuzzed out wall of sound. Mora’s vocals start, with an almost scratchy and abrasive tone to them. I did find that the vocals are maybe a bit of an acquired taste, almost the polar opposite of the powerful sound coming out of the instruments. But on repeated listening – and believe me, you will play this again and again – the vocals fit more and more. About halfway through, things become a bit more melodic and you start to get a feel that there is something very interesting going on behind the facade of this band.

The second track is ‘No Brakes On The Rape Train’, choice of song title aside; this is a near perfect example of just brilliant Stoner Rock. The quiet, 2 minute guitar intro just explodes into a rolling, exceptionally well thought out 9 minute instrumental voyage that rolls along and then picks up in terms of intricacy towards the end of the track. The last two minutes climbing monumentally to the sudden finish that comes far too soon.

One word that will inevitably enter your mind when listening to this track is ‘Kyuss’. It has that classic, early Josh Homme-esque guitar sound, and you will even recognise a few nods of the head to some tracks from the undisputed masters of all things Stoner. Not that this is a rip off or a pale imitation; far from it. This is a showcase of some very promising talent. And two tracks are nowhere near enough.

This is not what I was promised in the band name, bio or artwork. This is infinitely better. Barbarian Fist are heading into the studio in December to record a full length album, and, if this demo is anything to go by, it is going to be something to behold.