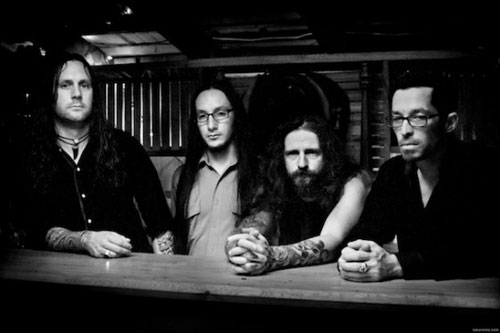 The tune serves as a bonus track on the band’s Way Of The Dead reissue. Initially released in 2002 via Century Media, the reissue comes by way War Crime Recordings and was released earlier this week. Intended for a tribute compilation that was never released, the song was recorded sometime in 2002 with the Way Of The Dead lineup which featured drummer James Staffel and vocalist/saxophonist/War Crimes co-owner Bruce Lamont with and former members Eric Plonka (Scientist) on guitars and Eric Clark on bass.

Turn up and tune out to Seraphic Light, now playing at Revolver at THIS LOCATION.

Throughout the entire month of July, YAKUZA, will reissue their first four albums along with one never-before-heard release all through War Crime Recordings. Amount To Nothing, Way Of The Dead, Samsara and Transmutations have been out of print for several years and in most cases, these reissues will contain unreleased bonus tracks and remixes.

July 1st, saw the reemergence of the band’s 2000 self-released debut album, Amount To Nothing and the aforementioned Way Of The Dead reissue. On July 15th, 2014, the band will revisit their Prosthetic Records albums: 2006’s Samsara, featuring two bonus tunes — a James Plotkin (OLD, Scorn, Khanate, Khlyst) remix of Back To The Mountain as well as The Ballad Of Mr. K — along with 2007’s Transmutations, which boasts Godflesh’s Justin K. Broadrick’s remix of The Blinding. July 29th, 2014 will see the unveiling of the never-before-released, “improvisational” recording entitled Kabuki Mono. YAKUZA’s moniker whenever they perform their mostly instrumental improvisational sets in Chicago, Kabuki Mono was originally recorded in the studio in 2001.

Newer developments for YAKUZA include a recent recording session at Soma Studios in Chicago with engineer and co- War Crime Recordings owner, Sanford Parker. The band has recorded over 100 minutes of improvised material (much like that of the Kabuki Mono recording) and plan to pick the best takes for release sometime early next year.