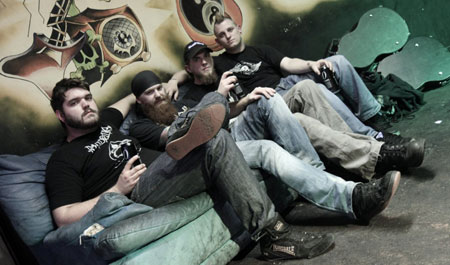 Comprising of 4 individuals with a love for slow horrible riffs & creating a hell of a lot of noise, Wizard’s Beard has influences from all genres and styles of music, from Mississippi John Hurt & William Elliott Whitmore to Iron Monkey & Emperor; they have enough inspiration to keep going for a long time. At the end of it all, their biggest influence is life & the crap it keeps throwing at everyone. This is how they deal with it!

After releasing their debut album in 2011, Wizard’s Beard got straight to work on album number 2 and set off on a European tour. Their 2nd album ‘Four Tired Undertakers’ is darker and meaner than what has come before. Keeping the relentless ethos of the previous recording, it builds on this and delves into new depths of misery.

‘Four Tired Undertakers’ is being released by Altsphere Productions on 10th February 2012 and features 6 tracks clocking in at 53 minutes.