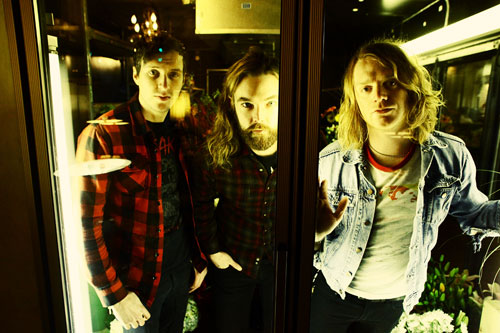 A mind bending amalgamation of progressive rock, metal, jazzy syncopations and swirling melodies, Blood Maker was recorded this past Spring with legendary producer Ross Robinson (At The Drive In, Glassjaw, Machine Head). The album is set for release via Brutal Panda Records on March 4th via limited edition LP and digital download. A preview of the album’s cover art designed by Orion Landau (Red Fang, Inter Arma) in addition to LP pre-orders can be viewed HERE with digital pre-orders available HERE. The music video for the LP’s first single, “Shadow Deserts” can be viewed below:

Guitarist/vocalist Josh Holland had this to say about the new material: “Working with Ross Robinson on this new release is a huge step for us growing as a band. We went into the studio hoarding a ton of new material we had written since our last release and laid it all out in the open. He really believed in the music and helped us hone it all in and focus our energies on the best stuff for this record. We are thrilled with how it turned out and very excited to release these new songs with Brutal Panda!”

The band are fresh off a west coast run with Red Fang and Helms Alee, with additional tour dates set to be announced in the coming weeks.