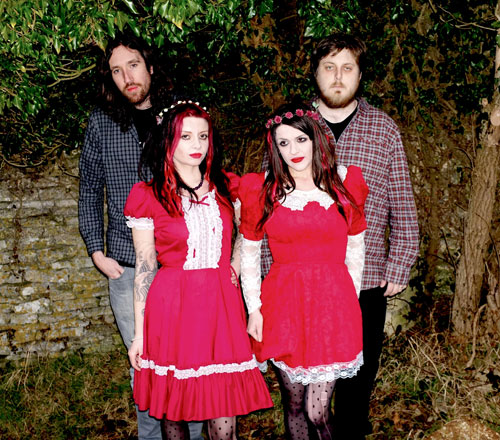 The video was filmed in the spring of 2013 at various locations, but primarily in and around Shaken Oak Farm where the band recorded their half of the split with acoustic alter-egos COMA WALL. Directed and edited by M. Arthur Wickson (who also produced the band’s previous music video for “Milk”), the “Soil” video attempts to capture more of the band’s live energy – apt for a song that has recently become a staple of their live set. Check it out below and the band hope you enjoy it.

The limited 12” is available to purchase direct from Shaman Recordings HERE.

In other news, UNDERSMILE are also extremely pleased to announce that a limited edition CD of ‘Wood & Wire‘ is to be released in June/July on Future Noise Recordings, the label which also released last year’s ‘Narwhal‘. The CD will feature an exclusive bonus track in the form of COMA WALL’s take on UNDERSMILE’s “Big Wow,” as well as more artwork (the original concept sketches) from the talented Craig Bryant. Pre-orders will be available soon via Future Noise Recordings.

The CD tracklisting is:

UNDERSMILE and COMA WALL only have a handful of live dates left in 2013 as both bands will be taking a break, with UNDERSMILE soon to be recording a song for a 12” split with Nottingham’s titanic duo Bismuth and COMA WALL beginning to make plans for their next release. Their upcoming dates are as follows:

1st June – Gullivers in Manchester – Undersmile with Ishmael, Grimpen Mire and Bastard of the Skies *this may be Ishmael’s last ever gig
29th June – Summer Sizzler all-dayer @ the Windmill, Brixton – Undersmile & Coma Wall will be performing with a great line-up of other bands *Undersmile’s final gig of the year
21st July – The Racehorse, Northampton – Coma Wall with M E R R I N and Nick Hudson – a night of music and improvised video
9th – 11th August – SUPERNORMAL FESTIVAL @ Brazier’s Park, Oxford – Coma Wall.

Wood & Wire will be available on vinyl at all of the above dates, and the CD will hopefully be available from the Summer Sizzler onwards.