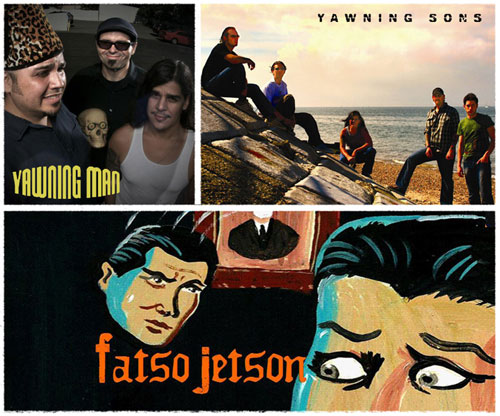 DesertFest UK are exceptionally proud to announce ‘The GODFATHER’S’ of desert rock FATSO JETSON & YAWNING MAN will be headlining this years DesertFest on the Friday night at the Underworld. They will be accompanied by an EXCLUSIVE performance of THE ultimate desert stoner US / UK collaboration that is YAWNING SONS. That’s right – YAWNING SONS, YAWNING MAN & FATSO JETSON all on the same stage, all on the same night – only at DesertFest UK 2013!!

This promises to be one of the most special and intimate nights ever conceived with the history of desert rock laid out in front of audiences. YAWNING MAN founded the desert generator parties with both their music and Lalli’s band Across the River being covered by Kyuss. Lalli has contributed to the Desert Sessions with FATSO JETSON and co-written songs with Josh Homme. Gary Arce remains one of the influential artists of the genre founding acts such as Dark Tooth Encounter, Ten East (with Brant Bjork), WaterWays (also featuring Mario Lalli) and of course the legendary collaboration with Sons of Alpha Centauri known as Yawning Sons.

This never before seen line up will deliver an amazing opening night to DesertFest and from the mainstage will set the tone for the entire festival. Expect exclusive guest appearances, specially designed memorial merchandise and most of all – the music of the desert from the people who created and the crafted the genre to which this festival is now a testament!!