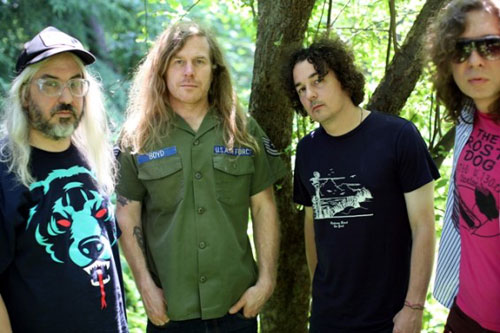 SWEET APPLE, the band of rockers from groups you’ve heard before is back! The Golden Age Of Glitter, a 10-song power-pop masterpiece featuring J Mascis (Dinosaur Jr., Heavy Blanket), Tim Parnin (Cobra Verde, Chuck Mosley), John Petkovic (Cobra Verde, Death of Samantha, Guided By Voices) and Dave Sweetapple (Witch, Vardlokk) will be released on April 8 via Tee Pee Records. The LP is the follow up to the band’s critically celebrated debut Love & Desperation, a record that featured “70s arena rock-like songs” (Pitchfork) and presented “one stomp box in the power pop of their youth, one in the heavy indie thud they invented” (SPIN).

The Golden Age Of Glitter was recorded from California to Massachusetts, with Cleveland in the middle and, according to vocalist John Petkovic, “is an album about connecting and missing flights, arrivals and departures.” Featuring 10 songs of SWEET APPLE‘s irresistibly infectious rock, The Golden Age Of Glitter travels a wide swathe of musical styles — almost as wide as the geography represented by the band — and revolves around a running narrative where the band becomes the theme (the group’s members are spread out across the country). Lyrically, the songs focus on “travel and distance”, longing for a new, different place and then tackling the reality of getting there.

Yes, SWEET APPLE cashed in their frequent flyer miles for a trip full of sunny, dark, moody and heavy sounds – the kind we’ve heard these guys do in other bands, but never before like this! The Golden Age Of Glitter features special guest contributions from from Mark Lanegan (Screaming Trees, Queens Of The Stone Age) and Robert Pollard (Guided By Voices) among others. ”Mark and Bob are longtime friends and we’re all fans of their music and approach to making music,” says Petkovic, who played with Pollard in Guided by Voices.

”By all normal measuring sticks, this record shouldn’t even exist. We’re a band spread out all over the county; we all play in a bunch of different bands; and we started by accident,” said Petkovic. ”And yet that’s kind of what I find interesting about SWEET APPLE. I came up with the first song for the record – “Wish You Could Stay (A Little Longer)” — while we were on tour. We all flew in from different places and airports to meet in Seattle, the first stop on a West Coast tour. We came in a night early, for our one and only practice. On one hand, you’d think it’s insane doing a band like this. On the other, there’s a newness to it; it’s like we’re starting over and doing something new every time. SWEET APPLE is a band of connecting flights and airports and that is also in an ongoing theme. I’ve never been in a band before where the band became the theme — where there was such a wide gulf between the destination and getting there.”

Interestingly, The Golden Age Of Glitter will spawn six (YES, SIX) music videos of varying storylines. The first — for “Wish You Could Stay (A Little Longer)” — features the band dispersed around the country and connected by paper airplanes. The SIX videos will include — in some form or fashion — the band, Mark Lanegen, legendary bassist and songwriter Mike Watt, paper airplanes, the Rose Bowl, NYC, Halloween trick-or-treaters and more. You’ll have to wait until the next press release to find out more…

J. Mascis – Also plays guitar in Dinosaur Jr. and drums in Witch. Played with Cobra Verde for a spell. Favorite color is purple. Owns hundreds of guitar pedals and dozens of Adidas. First job was a Japanese restaurant. Has made pilgrimages to India. Enjoys kale chips and Dunkin’ Donuts Munchkins.

John Petkovic – Also plays in Cobra Verde and Death of Samantha. Currently working on a movie in which he walks around L.A. in a space suit. Played in Guided by Voices for a while and on a J Mascis and Fog album. Owns dozens of Adidas. Former aid to the Crown Prince of Yugoslavia. According to Dave, he only eats canned food (Dinty Moore).

Dave Sweetapple – Also plays bass in Witch and Dusty Skull. Native of Newfoundland, Canada (where they beat baby seals). Grew hair long after seeing a photo of the Alice Cooper Band. His rare mushroom collection is as impressive as his vinyl collection. Aspiring ventriloquist

In the meantime, you can check out the video for the track ‘Do You Remember‘ from 2010’s ‘Love & Desperation‘ below: