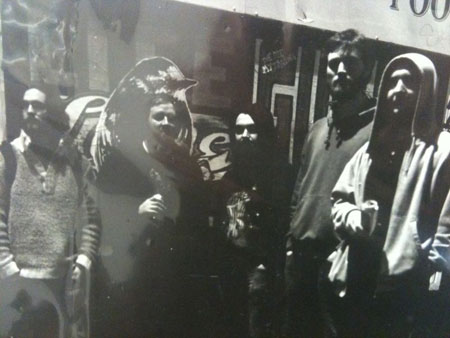 The UK’s very own SONANCE recently premiered a new video which features the final journey of their 42 minute behemoth of a track ‘Like Ghosts’, the video was created by the band using footage from Piski Films and the end result can be streamed below.

‘Like Ghosts’ is the first recorded material from the Bristolian 5 piece SONANCE and comes in two halves. Each part is an atmospheric heaping of interwoven arrangements, detailed and droned stretches that subside into sludge filled chasms as the bass pushes you through the floor and lifts dust from the walls. The record was written and rehearsed in a confined practice room in which the waves of sound could literally be felt shuddering up through your lungs and out of your mouth.

So far drawing comparisons with latter era Scott Walker / Bohren & Der Club Of Gore / Godspeed You! Black Emporer / Badalamenti / Janek Schaefer /Stapleton and Tibet /Gnaw Their Tongues /Abandon /Khanate /Corrupted, the band have made a promising impact via their live shows and have two tours of the UK and Europe booked for March/May 2013:

SONANCE started a year and a few months ago and began to find its feet in early 2012, in front of a wall of amps and live visuals.