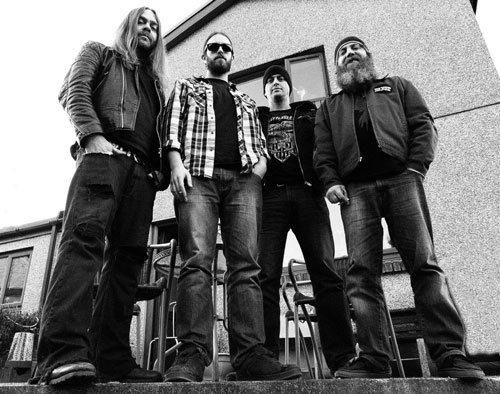 It is with elation to post the news that Heavy Welsh Rockers SIGIRIYA are back and have penned early 2014 for the release, with an as yet unnamed label, of their 2nd album ‘Darkness Died Today’ and now, the web portal of Doom, The Obelisk are streaming the track ‘Tribe Of The Old Oak’, which is also the first to see new vocalist Matt Williams (Tabularasa, Suns of Thunder) take the mic after the departure of original vocalist Dorian Walters.

Matt Williams joins ex-Acrimony stalwarts Paul Bidmead (Bass), Stuart O’Hara (Guitar) and Darren Ivey (Drums) for this rejuvenated incarnation of SIGIRIYA, now lose your mind with the heavy groove of ‘Tribe Of The Old Oak’ AT THIS LOCATION.

“Well really this is the album that nearly never was! After Dorian leaving the band for family reasons last summer and Stu nearly permanently losing the use of his thumb, things were looking a bit uncertain. After recruiting our new vocalist Matt ‘Pipes’ Williams things started to come together nicely. We ditched most of the material we had at that time because we wanted to start a fresh with a new singer and all contribute to writing rather than him just trying to copy what Dorian was doing on the stuff. This takes more time but was totally worth it in the end. I think this has allowed us to grow as a band and develop the sound to fit Matt’s unique style.

We recoded the album earlier this November (2013) at Sonic One with Tim Hamill who we recorded all our early Acrimony stuff with- in fact everything we ever did apart from Tumuli was with Tim, so this was a really comfortable and easy recording process with someone we knew well, and who knew us. We recorded live together in a room onto analogue tape. The mixing was done by Andrew Schneider in New York and finally mastering with Richard Whittaker in London. We’ve been blessed to work with the three best possible guys along all stages of this process and can thank them all enough!

Album title is ‘Darkness Died Today’ and signifies our intention for this album to be about the positive heaviness. Album should be out early next year but we’ve yet to finalise on which label…..discussions ongoing…. It has eight songs and we’ve chosen to preview the shortest track that happens to sit right in the middle of the running order. This track is called ‘Tribe Of The Old Oak’…..Hope you like it”.

More details about ‘Darkness Died Today‘ will be announced soon.