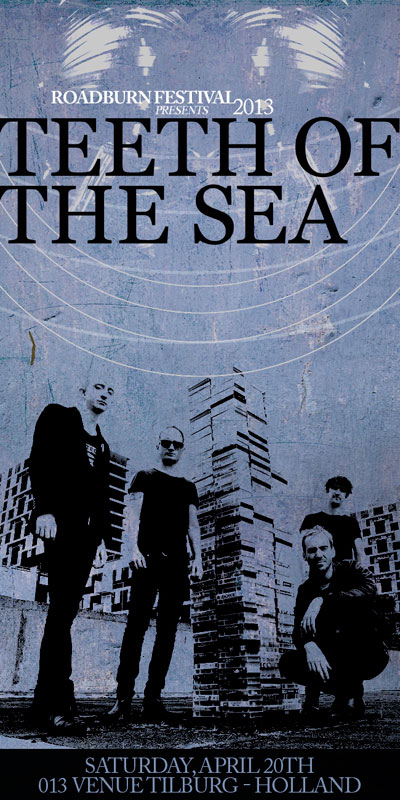 Roadburn are excited to announce that UK’s most adventurous and intrepid psychedelic rock outfit Teeth Of The Sea has been confirmed for Roadburn Festival 2013 on Saturday, April 20th at the 013 venue in Tilburg, Holland.

Taking inspiration from sources as disparate as the 70s French prog of Heldon, the soundtracks of Angelo Badalamenti, the white-noise-shamanism of Skullflower and the psych-punk vortex of Chrome, London’s Teeth of the Sea marry searing electronics, torrential riffage and cinematic atmospherics, in the process mapping out a mind-melting path between the garage and the cosmos.

Obsessions with science-fiction, trash culture and heavy amplification coalesced in style around their two albums thus far for Rocket Recordings, 2009’s Orphaned By The Ocean and 2010’s Your Mercury; reviewing the latter, Julian Cope asserted that Teeth Of The Sea ‘operate entirely within their own mythological mind map, their own specific & singular Weltanshauung. Epiphany after epiphany, brothers’n’sisters, that’s the shameless method this band deploys in order to enslave our minds.’

Teeth Of The Sea’s third album will be releasd on Rocket Recordings in early 2013, just in time for the band to lay waste to Roadburn. It’s destined to see them venturing yet further into unchartered realms of earth-shaking intensity and kaleidoscopic noise.