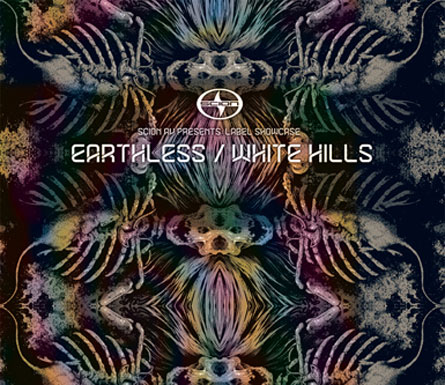 Recorded in November, 2012 at the world famous Roxy in Hollywood as part of the Scion-presented Roadburn Records label showcase, the free EP features Earthless performing the stargazing track ‘Red’ and White Hills delivering the boundless cut ‘Under Skin or by Name.’ The EP is available as a free download now at ScionAV.com, or stream both tracks in the Youtube clips below.

“Roadburn is a tastemaker rock festival that is well respected internationally,” ‪comments Jeri Yoshizu, manager of sales promotion for Scion. “We love what they do and wanted to be the first to bring Roadburn to the U.S.”‬

Earthless was formed in 1991 by Mario Rubalcaba, Isaiah Mitchell and Mike Eginton with the desire to create music incorporating a wide array of influences ranging from diverse bands (from Flower Travelin’ Band, Jimi Hendrix and Hawkwind to The Birthday Party, Can and Rory Gallagher, to name a few) re-imagined and born to stand on its own. Described by Rubalcaba as a “heavy, loud, sonic mind melt,” the music of Earthless features epic instrumental passages that have solidified the California trio as one of the must-see heavy psych rock bands on the planet today.

White Hills is guitarist Dave W., bassist Ego Sensation and drummer Nick Name. The New York group twists beauteous, brain-tenderizing riffs into tight spirals of sound that succeed through sheer momentum. Paying just as close attention to the quiet moments as the raging ones, White Hills’ songs are a push-pull between churning and floating, abandon and control. The end result is invigorating deep space rock that’s built to be performed (and experienced) live.

WOLVES IN THE THRONE ROOM: Recordings Penned For 2014 Release