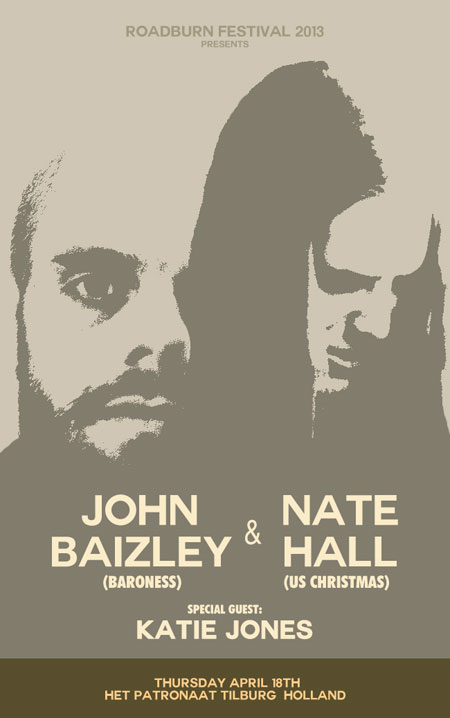 We are elated to announce the exclusive performance of John Baizley (Baroness) and Nate Hall (U.S. Christmas) for coming Roadburn Festival 2013. Both will play songs of Townes Van Zandt as well as Baroness and other material from Nate Hall’s highly acclaimed solo record A Great River.

John Baizley recorded his songs of Towns Van Zandt together with Katie Jones who will be performing with him and brings in some Violin, Cello, and other instruments as well.

John Baizley: “I am thrilled to be coming back to Roadburn to perform this year, it has been one of the supreme highlights of European tours in the past years. Roadburn is a refreshing change of pace amongst the turgid waters of European heavy-music festivals, many of which have gone the way of rampant commercialism. Roadburn remains one of the good-guys, a volunteer driven effort purely for the love and devotion to music.”

“Earlier this year, My Proud Mountain label approached me about contributing some tracks to the second “Songs of Townes Van Zandt” covers collection. I will be sharing the stage at Roadburn this year with some of the other contributors from that upcoming release. While Baroness is preparing to resume touring, I am excited to come to Tilburg and play music that our audience may be unfamiliar with me performing. I have always been an admirer and devotee of Townes, and I hope I can come and do some of his songs justice. This will be a unique opportunity for me, as I will be holding an exhibition at Gust van Dijk Gallery in Tilburg as well.”

Nate Hall: “I have known John for years now, and we are both excited about this show. I love playing solo, and I love collaborating with my friends. I’m sure this show will be special, and will bring out the best in both of us.”

The performance is scheduled for Thursday April 18 at The Patronaat during Roadburn Festival.