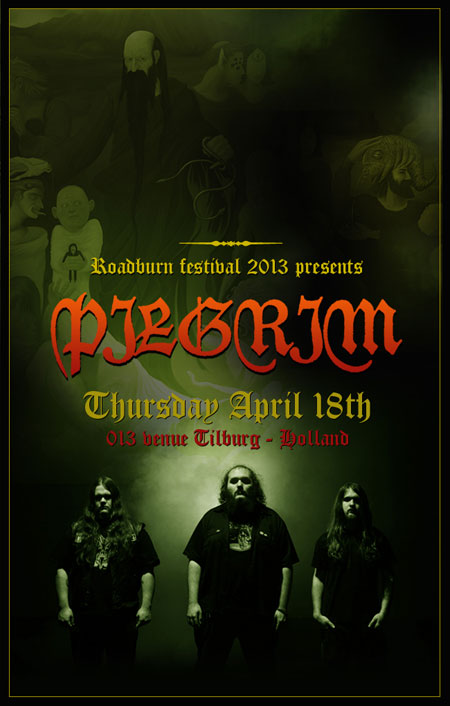 Roadburn excited to announce that Pilgrim will be appearing at Roadburn Festival 2013 on Thursday, April 18th at the 013 venue in Tilburg, Holland.

Remember the time when the great bands of the Seventies—Wishbone Ash, Rainbow and Led Zeppelin, to name but a few—wrote their tunes around mythical stories involving swords, sorcery and magic? For those of us who are hungry for epic music that tells of majestic tales, look for the Misery Wizard (Metal Blade), the debut long-player from Rhode Island’s disciples of doom, Pilgrim!

The trio of drummer Krolg, the Slayer of Man, bassist the Soothsayer and guitarist / singer the Wizard combine the chest-caving sounds of Pentagram and the mountain-moving tempos of Reverend Bizarre and tie it all together under the spiritual guidance of the grand masters of doom, Black Sabbath. Deep within the thick sonic walls, listeners can hear the Wizard tell tales about ancient beings from the sky, timeless heroes and the eponymous Misery Wizard.

Gather ‘round at the 2013 Roadburn Festival and be immersed in the power and might of Pilgrim and the Misery Wizard!