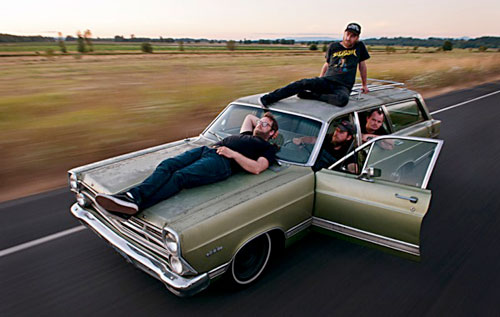 DesertFest London 2015 already boasts a headline act with a 20-year career and cult-like following in the form of SLEEP. With no intention of taking our foot off the gas, their next headline band is certainly on its way to earning similar status amongst the devotees of the Desert Rock Kingdom.

RED FANG are the musical equivalent of a stripped down, outlawed Harley-Davidson. Drop-tuned to a rumble as if from the bowels of Hell, there’s no bells, no whistles and certainly no disco remix here. After an hour long ride you’ll be sweating like a cornered nun and aching like a prison bitch but begging to do it all over again. What’s more, they’re fucking loud.

Since the release of their second album Murder The Mountains RED FANG have been on a seemingly incessant touring schedule – gracing the stage at festivals the world over, supporting Mastodon on both sides of the pond and headlining their own UK tours bringing the likes of Black Tusk and The Shrine in tow. All of this was accomplished whilst finding the time to write, record and released acclaimed third full-length offering Whales And Leeches.

Their aforementioned third album demonstrates the band’s evolution into a darker and doomier brand of stoner rock with tracks such as Dawn Rising (featuring Mike Scheidt of Yob) expressing a stark contrast to the beer chugging sing-a-long qualities of 2009 single Prehistoric Dog. But that’s not to say their won’t be plenty o’ beer-swillin’ good times when RED FANG take to the DesertFest stage next year. Let’s just hope a few (dozen) cases of PBR make their way to the venue so that the DesertFest faithful can give these Portland, Oregon boys the raucous welcome they deserve.