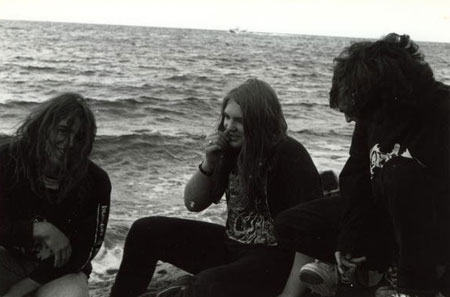 Relapse Records is extremely excited to announce the release of Australia’s legendary death-doom pioneers diSEMBOWELMENT’s seminal full-length debut, Transcendence Into the Peripheral, on vinyl for the first time ever.  This groundbreaking opus of funeral doom will be limited to a one time pressing on gatefold double LP and is set for a May 8th 2012 release date.   Pressing information and pre-orders are currently available at this location.

Additionally, 2/4’s of the band will be performing a series of special shows under the names d.USK and their new project Inverloch, representing the final embodiment of diSEMBOWELMENT.  A limited edition, deluxe version of Transcendence Into the Peripheral featuring a screen printed cover and alternate vinyl color will be available exclusively at the band’s performance for the upcoming Roadburn Festival.  More details on this special press will be announced shortly via Roadburn.com.  A full list of confirmed tour dates is available below with more to be announced shortly.

‘an evening with Inverloch and d.USK, representing the final embodiment of diSEMBOWELMENT.’