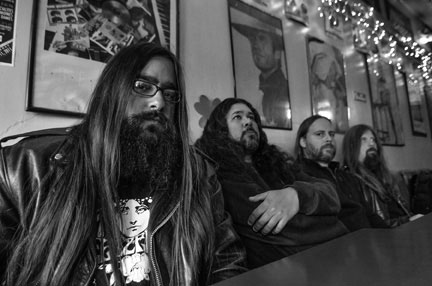 Hoosier Doom Rock veterans DEVIL TO PAY released a new music video for their song “Ten Lizardmen & One Pocketknife” today via exclusive premiere at The Obelisk.

“Ten Lizardmen & One Pocketknife” is third video from their Ripple Music debut album, “Fate Is Your Muse“. The video was shot by Songbird Media Group and prominently features the “Godzilla Room,” lovingly provided by friend of the band, Gregg Stewart.

The video interweaves Dungeons & Dragons game play, regressive hypnosis sessions, and footage of DEVIL TO PAY rocking out the way they know best, all injected with a tongue in cheek sense of humor.

Check out the video at THIS LOCATION.

The video is being released in time for DEVIL TO PAY‘s upcoming eleven date East Coast tour, which includes a slot at the vaunted Stoner Hands Of Doom Festival on Sunday, November 10th in Richmond, Virginia. The “Ten Lizardmen & One Pocketknife” video also appears in conjunction with a limited edition 7-inch single on colored vinyl, to be released in time for the tour. The B-side of the 7-inch is a cover of Eldemur Krimm’s classic “Black Fog.”

DEVIL TO PAY was recently awarded “Best Metal Band” honors from NUVO Newsweekly’s “Best of Indy” for the fourth straight year. “We’re really honored to win,” said drummer Chad Prifogle. “The voting is done by the readers of NUVO and we’re grateful to all our fans for their support.” 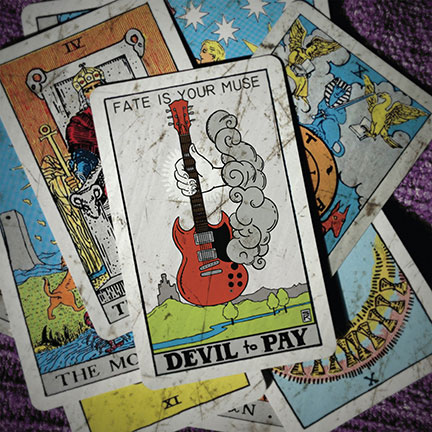 “Fate is Your Muse” has been a top-selling album for heavy rock indie label, Ripple Music. A scant few limited-edition, splatter colored vinyl LP’s are still available in the Ripple Music Store. The album was also release on black vinyl, CD, and digital formats. All are available at the Ripple Music Store and Ripple Music Bandcamp as well as premium records stores world-wide and via Nail Distribution, Clearspot International and Code 7.