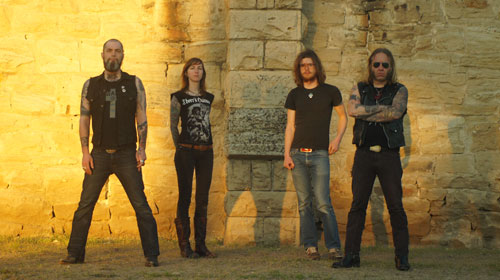 At long last, the blistering debut recording from one of the most-talked about doom bands of the past year is nearly within our grasp! Boise/Portland vintage doom merchants UZALA have aligned themselves with At War With False Noise and Witch Sermon Productions to unleash their monumental debut. The self-titled album will be manifested in wax by At War With False Noise, while Witch Sermon will handle the cassette version (which will feature a special bonus track, “Cataract”). Featuring Nick Phit (formerly of GRAVES AT SEA, ATRIARCH) on bass, UZALA’s lineup is rounded out by drummer Stephen Gere, guitarist/hellish vocalist Chad Remains, and chanteuse & axe-slinger Darcy Nutt (a world-renowned tattoo artist and devastating talent).

For those who are unfamiliar with this entrancing young band, avail yourselves. This is doom as the masters first played it. UZALA are dark, shrouded in occult visions and standing firmly with eyes turned to the past – we’re talking straight-up ’70s here, copious amounts of Black Sabbath worship, and more than a few Saint Vitus licks, with a younger, more fresh-faced Jinx Dawson at the helm. Fans of WITCH MOUNTAIN, JEX THOTH, BLOOD CEREMONY, ACID KING, ELECTRIC WIZARD, PENTAGRAM, BLACK SABBATH, and the Devil’s blues, take note. With guitarist/vocalist Darcy Nutt’s full-bodied vocals – at times throaty, at times angelic – slithering over and under the hypnotic, distorted fuzz riffs and Chad Remains’ sporadic hoarse invocations mixing up the dynamic, UZALA have managed to nail the whole “female fronted band” thing without making a big deal about it – or any kind of deal at all. Like doom goddess Liz Buckingham once said, “I want to be thought of as a great guitarist – not a great female guitarist;” call it a hunch, but we get the feeling that UZALA’s Darcy would agree.

The  album’s crushing, velvety fuzzed-out sound is attained by a Blake Green (Wolvserpent) production and mastering by long-time At War With False Noise cohort Andy Lippoldt of Persistence In Mourning. The simply amazing artwork was created by vocalist /guitarist Darcy Nutt, while layout and design was summoned by Stephen O’Malley.

At War With False Noise will be presenting UZALA’s debut LP in a limited pressing of 333 copies; preorders are now up on their website, and each order will receive a screenprinted patch and well as other special offers. Embrace the darkness: http://www.atwarwithfalsenoise.com/releases.html, you can also view an album teaser below and if you haven’t read it already Jas interviewed the band band in June which you can read here.