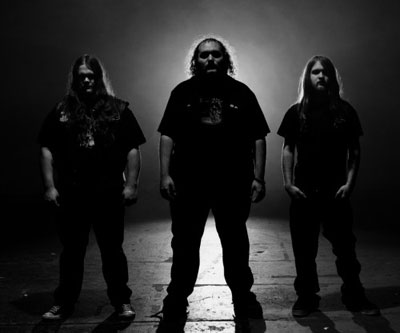 Following a successful set at Denmark’s Heavy Days In Doomtown Festival, Rhode Island-based doom conjurors PILGRIM are pleased to announce their headlining appearance on this year’s edition of The Stoner Hands of Doom Fest. Set to take place August 30 through September 2 at El n Gee Club in New London, Connecticut, PILGRIM will appear alongside the likes of Earthride, Revelation, When The Deadbolt Breaks and more!

Stoner Hands of Doom is one of the premier annual gatherings for underground heavy/stoner/doom music in North America. SHoD has been held annually since 1999 in various small venues throughout the U.S. Many acts are unsigned/indie and many travel thousands of miles to gather in the name of rock. The concept was dreamed up by promoters Rob and Cheryl Levey, who have planned, booked and organized it since its inception. Under their guidance, the festival affectionately known as SHoD has grown over ten years from a one-day event to a weekend-long gathering, featuring over three dozen bands.

Comments drummer Krolg Splinterfist, the Slayer of Man: “Playing in Scandinavia was a great honor. The first ever Heavy Days in Doomtown festival was a massive success and PILGRIM is proud to have been a part of something that will surely become a chief ceremony for all lovers of music that is slow and heavy. Hails to all of the promoters and organizers who made our shows in the area a possibility! We will return sooner than later! PILGRIM looks into the future with great eagerness. The Stoner Hands of Doom festival has a long history in the New England doom metal community and we are prepared to add our name to the long list of bands that have glorified this fest. We are privileged and honored to be headlining the bill with the legendary Revelation, who has been an inspiration to many modern doom bands, ourselves included.”

In addition to their stint on SHoD, PILGRIM will bring their dirge to the stage of Brooklyn this Friday at Saint Vitus with fellow doom doers Witch Mountain.

PILGRIM come to the Metal Blade roster via Alan Nemtheanga’s imprint, Poison Tongue Records. The doom trio consists of: Splinterfist alongside bassist Count Elric the Soothsayer and guitarist/vocalist The Wizard. With a mix of destruction, misery and beauty, these young disciples of doom blend a surprisingly original sword ‘n’ sorcery feel with the classic chest-caving heaviness of the masters, Black Sabbath, Saint Vitus, Reverend Bizarre and Pentagram. Their thick walls of majestically darkened guitar, massive booming bass, and dangerously powerful yet calculated drumming lull listeners into an intense dream-like trance, abducting them to places they never knew were dwelling within their own minds. Commented Pitchfork: “…in a realm where the old-school and the experimental push against one another in an eternally dynamic non-equilibrium, it’s certainly not about who your influences are. It’s, of course, about how you use them. PILGRIM simply have fun with these predecessors, renewing old sounds with the zeal of teenage boys worshiping cheap Sabbath posters on their bedroom walls and the skills of players who’ve been at this for a while. PILGRIM sing about devils and tears, paying dues and surviving adventures, taking care to touch on most of the requisite tropes while not pushing any one too far... This is an excellent debut from a preternaturally developed upstart.”