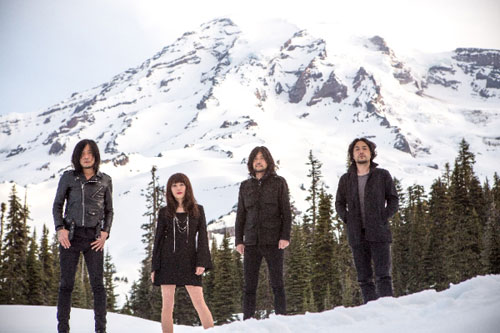 Japanese instrumental rock band, MONO, have confirmed that work is complete on their next release, and have unveiled the first snippet of new material.

A short clip of the track Where We Begin plays at the beginning of a video blog featuring Japanese mountineer, Nobukazu Kurik.

Nobukazu Kuriki is currently attempting to climb Broad Peak mountain on the Pakistan/China border, and will be documenting his journey via YouTube. He has already conquered the highest peaks in 6 continents, and has had one ill-fated attempt at Everest. In 2009 he was airlifted from the world’s highest mountain suffering from severe frostbite on his fingers, toes and nose, resulting in the first two knuckles of all eight fingers, and the first knuckle of one thumb being amputated. MONO have provided their music for use on his footage in support of his challenge.

Watch the first part of the video blog, featuring Where We Begin, below while Parts 2-5 of his video diary can be viewed HERE.

The video also features older material from MONO, whose last release was 2012’s For My Parents. The album featured the Wordless Music Orchestra, who also joined MONO in 2009 for a special 10th anniversary performance in New York City which was eventually released on DVD as Holy Ground: NYC Live With The Wordless Music Orchestra. MONO live shows are universally acclaimed; the evocative and powerful soundscapes of their albums are brought to life in emotionally charged and atmospheric performances all over the world.

The video for the track Legend (from For My Parents) can be viewed below:

No further information regarding the next MONO album is currently available, but announcements are due within a few weeks. Follow the social media links below to keep up to date with MONO news.