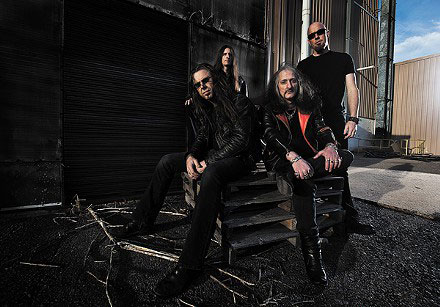 Before these times of online enlightenment they were one of the archetypal ‘lost originators that never made it’, and “When the Screams Come” is probably the best song Black Sabbath never wrote. Pentagram’s long and tumultuous career has scaled every peek and suffered every pit-fall that the Spinal Tap dimension can offer and these events were played out in back-stage obscurity, with the few devout proto-doom fans surviving only on which ever retrospectives, bootlegs or sporadic low-key album releases they could lay their hands on.

Luckily there is such a thing as karma, Pentagram is back with a vengeance. With the strongest lineup since the seventies, a movie about his life that was instrumental in cleaning him up, and 2011’s “Last Rites” LP under his belt, the inscrutable showman Bobby Liebling has now travelled over 30 countries, having previously never travelled more than five US states during half a life half locked in a drug addiction wilderness. He has achieved one of the most life-affirming reincarnations and redemptions in our times, not just in rock.

Be forewarned, Desertfest 2013 gives you the chance to come and live rock and roll history in Liebling’s mercurial presence, stalking the stage with maniacal eyes. With an offer like that you shouldn’t have to spend too long reviewing your choices.