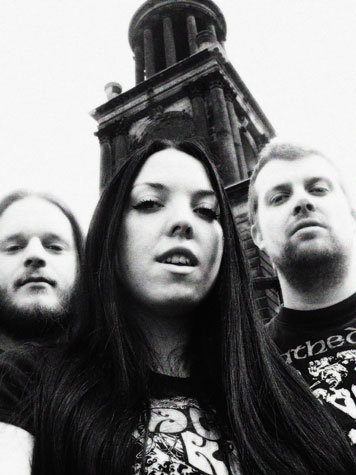 They began drinking, writing and jamming in 2010, torn asunder by the hills and mountains of the Peak District. John (bass and vocals), Jem (guitar) and Steve (drums) have finally unearthed the being that is COLTSBLOOD. Inspired by dark myths, legends, history, death, and the human mind, the band is driven by a mutual love of beer and the calling forth of riffs to summon dark legends. With no pre-conceived ideas of how they should sound, recordings so far being doomed, primitive and raw, the band seeks their own path wherever it may lead.

A demo (limited to 100 tapes) is set to be released on the 6th June and will be available online via bandcamp and at upcoming gigs. Self-recorded in a warehouse in Sheffield in May, the demo will consist of two tracks (Abyss Of Aching Insanity and Beneath Black Skies) spanning 28 minutes, including an insert featuring artwork and lyrics. The band are currently working on an album which will be recorded later this year with Chris Fielding (Winterfylleth, Serpent Venom, Electric Wizard, Napalm Death) at Skyhammer Studios, set up by Jon Davis of Conan.

Now check out the video for the track ‘Abyss Of Aching Insanity‘ below.

COLTSBLOOD will be travelling the lands to share their doom, beginning with a short tour with Space Witch in June , followed by a show in support of death/thrash legends Vomitor and gigs in Scotland with the almighty Ommadon in July.